Sinn Féin lost one seat in the Assembly elections, but Gerry Adams was happy with the 'mighty' campaign. 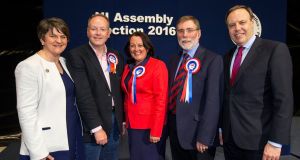 Politics shifted a little in the Northern Ireland elections which finally came to a conclusion on Saturday afternoon.

After the final three seats were decided in the last count for the Upper Bann constituency the shape of the next 108-member Northern Assembly was determined.

It will look like this: DUP, 38 seats (no change); Sinn Féin, 28 (down one); the Ulster Unionist Party, 16 (no change); the SDLP 12 (down two); Alliance, eight (no change); the Greens, two (up one); People Before Profit, two (up two); Traditional Unionist Voice, one (no change), and Independent unionist Claire Sugden returned in East Derry.

Sitting in the Sinn Féin offices in Derry at the latter stages of the Northern Assembly election campaign, Martin McGuinness made one definitive prediction.

He said that regardless of what might happen in some marginal constituencies, regardless of how the smaller parties might perform, the DUP and Sinn Féin still would be the driving forces behind Northern Ireland politics when all the votes had been counted.

He was absolutely correct. There were a number of surprises in this election, some shifts in allegiance, some changes to personnel, but the DUP and Sinn Féin are still firmly in charge at Stormont.

There will be a slightly different complexion to Parliament Buildings, however. The deeper hues of orange and green will dominate but there will be a shade of red in the Assembly chamber as well. There is also a stronger shade of non-republican green on the benches.

DUP leader Arlene Foster will be delighted with the performance of her party; McGuinness and Gerry Adams less so. The DUP started this campaign with 38 seats and ended with 38. Sinn Féin had 29 seats. Now it has 28.

SDLP leader Colum Eastwood, Ulster Unionist Party leader Mike Nesbitt and Alliance leader David Ford will be disappointed at the outcome but particularly for the UUP there also will be relief that the results were not a lot worse.

As McGuinness said he and Foster are still jointly at the helm. But a little bit of the gloss was taken off that continuing domination for Sinn Féin due to the single loss it suffered and the failure of McGuinness to ensure a third and extra seat for the party in Foyle.

Sinn Féin held on to its two seats in Derry while the SDLP lost one of its three seats, outgoing MLA Gerard Diver taking the hit. Veteran socialist and journalist Eamonn McCann (73) was returned and will be joined at Stormont by his People Before Profit colleague Gerry Carroll (28) who romped home in West Belfast at the expense of Sinn Féin.

In the last Assembly, Jim Allister of the Traditional Unionist Voice party, who was returned in North Antrim, was the dominant, so to speak, Independent voice. He sat in what is known as the “naughty corner” of the chamber.

With McCann on the benches that corner will be noisier and naughtier and Allister will have some competition from the opposite end of the left-right divide.

Green Party leader Steven Agnew upped his vote when returned in North Down, while in Belfast South the party candidate Clare Bailey also took a seat that Alliance was eyeing.

Candidates such as Carroll, McCann and Bailey will grab some of the headlines because they are new faces at Parliament Buildings and will bring a stronger radical edge to Stormont.

But, again, as McGuinness said, the DUP and Sinn Féin will be in the driving seat.

The election proved something of a triumph for Foster and for the party strategists who decided to place almost the entire focus of their campaign on her leadership and personality.

Foster’s vote-getting attraction, together with the warning that unionists failing to vote DUP could result in Sinn Féin winning most seats and therefore taking the first minister post, clicked with many unionist voters – notwithstanding that Sinn Féin did not even get close to posing such a threat.

The two-day count was an anxious time for the SDLP and UUP and for their relatively new leaders Colum Eastwood and Mike Nesbitt. The SDLP won 14 seats in 2011 but by Friday night it was clear it would lose the seat of its deputy leader Fearghal McKinney in South Belfast and also Diver’s seat in Foyle. West Belfast and Upper Bann were also under threat.

Then late on Friday night there was some good cheer for Eastwood when Alex Attwood very narrowly squeezed home in West Belfast where Sinn Féin lost a seat. On Saturday there was further good news when the party’s Richie McPhillips gained a seat at the expense of Sinn Féin in Fermanagh and South Tyrone.

There was also the possibility of a major surprise in Upper Bann where outgoing Sinn Féin Minister for Education John O’Dowd was under pressure but in the end prevailed, gaining a second seat for the party in the constituency.

Longstanding SDLP stalwart Dolores Kelly lost her seat leaving the party with just 12 seats and a lot of revitalising work for Eastwood to do.

On Friday the UUP, which won 16 seats in 2011 but lost three through defections, was doing reasonably well, taking back John McCallister’s seat in South Down and also gaining a seat in Lagan Valley from the DUP.

Moreover, Mike Nesbitt topped the poll in Strangford while his running mate Philip Smith regained the seat previously held by David McNarry – who did not run and who had shifted from the UUP to Ukip.

On the negative side it lost a seat in South Belfast where Rodney McCune was its candidate. Nesbitt was hoping for 18 or 19 seats but to be back at 16 is a decent result and must give the party hope.

Alliance, which won eight seats five years ago, maintained that position. Naomi Long was easily returned in East Antrim and could be in line for the leadership when Ford decides to retire. With Ford also standing down from the justice department either she or Stephen Farry, who held his seat in North Down, would be in line to be the next minister for justice.

That would only happen however if the DUP and Sinn Féin exercise effective mutual vetoes to ensure neither a nationalist nor a unionist politician takes the position. The compromise that applied in 2010 may apply again with Alliance taking the portfolio even though the party does not have sufficient seats to be entitled to a ministry under the proportional d’Hondt system of appointing ministers.

Still Ford will be disappointed. The party was hoping to hit 11 seats and had particular but unrealised hopes for gains in South Belfast and East Belfast.

So, after a lacklustre election campaign but reasonably exciting election count there are changes in personnel and some minor political shifts, but the DUP and Sinn Féin remain in command.