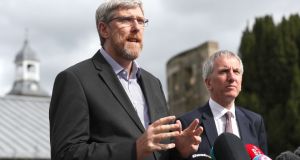 Sinn Féin has called on the Taoiseach Leo Varadkar and the British prime minister Theresa May to directly engage in the Stormont talks aimed at re-establishing the Northern Executive and Assembly.

The parties and the British and Irish governments were back at Stormont Castle on Friday after they failed to meet Thursday’s 4 pm deadline for a deal.

While the Northern Secretary James Brokenshire has given the North’s five main parties until Monday to reach agreement, there was little sign of significant progress at Stormont on Friday, judging by the comments of senior Sinn Féin negotiator John O’Dowd.

He blamed the DUP for the deadlock and accused the party of refusing to move on issues such as the Irish language, same sex marriage and a bill of rights for Northern Ireland.

“After weeks of negotiations the DUP have still not agreed to the rights based society that we require and there is still no agreement on acht na Gaeilge of a bill of rights, marriage equality, integrity at the heart of government,” said Mr O’Dowd.

Calling on Mr Varadkar and Ms May to directly intervene he said that the negotiations “need to come to an urgent conclusion”.

“The British prime minister and the Taoiseach need to become directly involved in these talks. The British government need to remove their partisan approach, and set aside their relationship with the DUP if these talks are to succeed,” said Mr O’Dowd.

“We are calling on the Taoiseach and the British prime minister to become directly involved in these talks as a matter of urgency,” he said.

Meanwhile, the Minister for Foreign Affairs Simon Coveney, who has been at the talks since Monday, returned to Dublin on Friday afternoon. His spokeswoman said the Minister wanted to give the parties “time and space to talk” ahead of Monday’s deadline.

On Monday Mr Brokenshire is due to make a statement in the House of Commons on the way forward. He has three options: to call fresh Assembly elections; to bring back direct rule from Westminster by British Ministers; or to further extend the deadline for agreement into the early autumn.

The foreign affairs spokeswoman said the parties engaged in a “good round of meetings this morning”.

Sinn Féin’s Mr O’Dowd in speaking to the press at lunchtime said the recent £1 billion Tory-DUP deal had “emboldened” and “entrenched” the position of the DUP in regard to all the matters that needed to be resolved.

He said the two governments needed to bring leadership to the talks. “They need to bring the strength of a government and of governments to these talks, and urge the DUP that outstanding agreements have to be implemented if we are to move forward to a stable Executive in the weeks and months ahead,” he said.

Asked how long Sinn Féin would continue at the talks, he replied: “We will stay here as long as there is a glimmer of hope that there will be success in these talks. But we are realists and we are experienced negotiators and we know there needs to be a step change in these talks.

“Hence the reason we are calling for the Taoiseach and British prime minister to become directly involved.”

On same sex marriage, Mr O’Dowd said: “Sinn Féin will be supporting tomorrow’s march and rally in support of marriage equality in Belfast and see this morning’s vote in Germany as another step forward towards marriage equality.”

Mr O’Dowd said engagements were continuing between the parties on Friday afternoon and Sinn Féin would also further negotiate with the DUP on Friday.