Gerry Adams has strongly criticised the DUP ahead of the Northern Ireland Assembly elections saying 'the failure in this case is fairly and squarely with the DUP.' 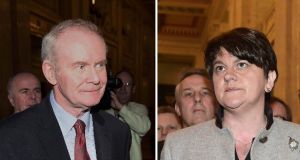 Here are the key events in the “cash for ash” scandal which has culminated in a fresh election in Northern Ireland, now called for this March.

June 2016 - Reports of allegations of a multimillion-pound “cash for ash” scandal in relation to Northern Ireland’s Renewable Heat Incentive (RHI) eco-scheme. In response, auditors confirm they are investigating.

July - An Audit Office report into RHI says “serious systematic failings” would hit the Northern Ireland budget by “hundreds of millions of pounds”. The investigation was prompted when a whistleblower contacted the Northern Ireland Executive alleging the scheme was being abused.

September - Public Accounts Committee launches an investigation into the Audit Office’s findings. A series of key officials involved in the scheme give evidence on an initiative one committee member brands “the biggest financial scandal since devolution”.

December 6th - Spotlight programme causes a public storm over RHI after revealing a whistleblower had contacted then economy minister Arlene Foster. The show’s use of images of cash being burned in a bonfire catches the public mood and escalates the issue to a full political crisis.

December 14th - DUP MLA Jonathan Bell, who succeeded Ms Foster as minister of the department that set up the RHI scheme, breaks party ranks to level a series of allegations against the First Minister and party advisers in an explosive TV interview. He claims he tried to pull the shutters down sooner on the scheme but was dissuaded by Ms Foster and DUP advisers. Ms Foster disputes his account.

December 16th - Martin McGuinness calls on Arlene Foster to “stand aside” as First Minister while the “cash for ash” scandal is investigated. Ms Foster replies that she will not be stepping aside and “does not take her instructions from Sinn Féin”.

January 4th - Arlene Foster again insists she will not stand down over the RHI scandal, adding that some calls for her to do so are “misogynistic”. DUP Ministers say they are working on emergency legislation to bring the £490 million overspend to “zero”. But Sinn Féin finance minister Máirtín Ó Muilleoir says he is “bemused” the DUP announced it to the media before talking to him.

January 5th - Former DUP MLA David McIlveen criticises Ms Foster for what he describes as the RHI “omnishambles”. Sinn Féin leader Gerry Adams says the political institutions have reached “a defining point” over the First Minister’s refusal to step aside.

January 10th - Secretary of State James Brokenshire says the situation makes an assembly election look “highly likely”. He calls for talks with all parties to find a resolution to the crisis at Stormont.

January 11th - Sinn Féin says it will not enter negotiations ahead of new Assembly elections. British prime minister Theresa May says the Government is putting “every effort” in to ensure a solution is reached.

January 13th - RHI inspectors say they have suspended payments at more than half the boilers they have audited. Regulating body Ofgem said of the 63 inspected, payments were suspended at 33 of them. Five have since had payments reinstated after investigations.