Stormont talks to go into ‘deep-freeze’ during UK election 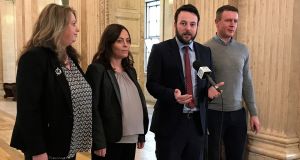 SDLP leader Colum Eastwood (second right) said he was “open to any discussion on how we can protect the Remain vote in Northern Ireland”. Photograph: Deborah McAleese/PA Wire

Northern Secretary James Brokenshire and Minister for Foreign Affairs Charlie Flanagan will on Thursday assess the realistic chances of a political deal being brokered at Stormont, now that a Westminster general election has been called.

The two ministers will meet the political parties against a backdrop of the focus switching from efforts to restore the Northern Executive and Assembly to politicians girding themselves for a bruising election campaign.

While Mr Brokenshire and Mr Flanagan continue to urge the parties to agree a deal by early May, Mr Flanagan struck a more pragmatic note.

“I am of course concerned about the impact of a UK general election on the ongoing talks process in Northern Ireland, ” he said.

“I am conscious of the political reality that all of the parties involved in the talks will now be competing in a general election and mindsets will inevitably shift to campaign mode.”

And while the talking will continue for the moment, the general assessment from the Northern parties on Wednesday was that the negotiations, formally or informally, must be suspended during the election campaign.

DUP MP Ian Paisley, who will be seeking to be returned in North Antrim, said the “freezer bags were out” and the “deep-frost button” had been pressed on the talks.

As the parties prepare for the campaign, attention has turned to the possibility of electoral pacts.

Ulster Unionist Party MP Tom Elliott, whose Fermanagh South Tyrone seat is threatened by Sinn Féin, said his party will enter into discussions with the DUP in the “next few days”.

The new UUP leader, Robin Swann, has also stated he is open to discussion about electoral pacts. Talks are likely to be around constituencies such as North Belfast, South Belfast, East Belfast and Upper Bann.

DUP Lagan Valley MP and senior party negotiator Sir Jeffrey Donaldson said his party was prepared to enter into an electoral arrangement with the UUP at Westminster.

The DUP enters the election with eight seats, Sinn Féin with four, the SDLP with three, the UUP with two, and independent unionist Lady (Sylvia) Hermon holding North Down.

Two of the SDLP’s three MPs, Margaret Ritchie in South Down and Mark Durkan in Foyle, said the SDLP “don’t do sectarian electoral pacts”. However, party leader Colum Eastwood opened up the possibility of Remain parties entering into some form of “anti-Brexit” electoral accord.

Mr Eastwood said he was “open to any discussion on how we can protect the Remain vote in Northern Ireland”.

“If Theresa May wants an election about Brexit let’s show her that people in Northern Ireland don’t support a hard Brexit. We don’t do sectarian pacts where it’s unionist versus nationalist. We will speak to anybody who wants to retain our membership of the European Union and protect our citizens from a hard Brexit,” he said.

Sinn Féin’s Northern leader Michelle O’Neill said her party wanted to fight the election “very strongly” on the grounds of opposition to Brexit and austerity and would therefore “be up for discussions” on an electoral pact.

Alliance Assembly member for Strangford Kellie Armstrong said her party “will not be going into any pacts with any other party, no matter their outlook or goals”.

“That is not how we operate – people know if they vote Alliance, they will get Alliance. We are standing on our own two feet and putting forward a constructive vision which we believe the public will back,” she said.