Robin Swann to become next leader of the UUP 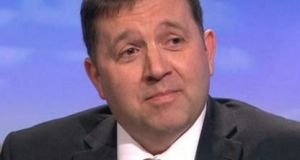 Robin Swann: he will be formally ratified as Mr Nesbitt’s successor by the UUP ruling council on April 8th

North Antrim MLA Robin Swann is to be the next leader of the Ulster Unionist Party (UUP).

The 45-year-old UUP chief whip was the only candidate to put their name forward to take over from Mike Nesbitt after the current UUP leader announced he was resigning from the post following a disappointing result for the party in the Assembly election this month.

The deadline for nominations for the position was noon on Friday. There had been speculation Mr Swann’s party colleagues Doug Beattie and Steve Aiken would seek election, but they did not.

Mr Swann, who was first elected to the Assembly in 2011, will be formally ratified as Mr Nesbitt’s successor by the UUP ruling council during an annual general meeting on April 8th.

After the UUP dropped from 16 seats to 10 seats during the snap Assembly election on March 2nd, Mr Nesbitt said the “buck stops here” and signalled his intention to quit as party leader. He will stay on as an MLA for Strangford.

At the Westminster election in 2015, the UUP returned two MPs despite Mr Nesbitt’s calls for a unionist pact with the DUP.

By the following year he had joined forces with the SDLP in opposition to the DUP, and started promising a post-sectarian future for the North. In last year’s Assembly election, he failed to shake the DUP’s dominance as Arlene Foster took over leadership of the larger party.

The SDLP secured 12 seats in this month’s election, overtaking the UUP as the third largest party in the North behind Sinn Féin and the DUP.

During the last Assembly term, Mr Swann chaired the Stormont Public Accounts Committee. He is a former president of the Young Farmers’ Clubs of Ulster.