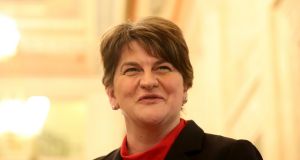 Fresh talks aimed at restoring the Northern Executive and Assembly got off to a reasonably positive start, it was generally agreed at Stormont on Monday evening.

The leaders of the five main parties engaged in a roundtable session of talks on Monday, the first time since efforts began to reinstate devolution after the Assembly elections on March 2nd.

Efforts to hold plenary negotiations in the last round of talks failed, chiefly because of resistance by Sinn Féin to Northern Secretary James Brokenshire chairing such negotiations.

This plenary session was chaired by the head of the Northern Ireland Civil Service Sir Malcolm McKibbin.

The DUP leader Arlene Foster said the talks were “more structured” than the three weeks of talks last month with SDLP leader Colum Eastwood agreeing they were better organised and were “a step in the right direction”.

Sinn Féin senior negotiator John O’Dowd said a deal could be done “speedily” if the British government and the DUP made clear they will “commit to honour previous agreements”.

“Sinn Féin remain talking to the parties and the governments, but we cannot have an endless round of talks to reach a new agreement while other agreements are left to gather dust on the shelf. That is not credible. That is not what the public want,” he said.

“If previous agreements are implemented we can address the issues which are not part of existing agreements and reestablish the Executive,” he said.

While the talks atmosphere appears to have improved, disagreement remains between Sinn Féin and the DUP over what was previously agreed. Sinn Féin points to matters such as an Irish language act flowing from the 2006 St Andrews Agreement and a bill of rights from the 1998 Belfast Agreement.

DUP negotiators have said they were not party to such deals and that these were matters still up for negotiation.

And while there are detailed proposals in place from December 2014 to deal with the past and bring some assistance for victims of the Troubles, there is still considerable distance between the DUP and Sinn Féin over how the legacy of the past can be addressed.

It is expected that Mr Brokenshire and the Minister for Foreign Affairs, Charlie Flanagan, who will be at Tuesday’s talks, will chair a series of meetings on this issue in the coming period.

DUP leader Ms Foster said a deal was possible. “We had a good constructive meeting of the five party leaders and we are going to build on that and try to get the government up and running as soon as possible,” she said.

But she warned that agreement hinged on “whether there is a willingness” to strike a deal. “There is a very short window and we need to get down and deal with the issues,” she said.

Ulster Unionist Party negotiator Tom Elliott also saw some opportunity for a deal. “The chances of success are possible. Indeed they could be probable if people want to show some respect for each other and stop drawing red lines and have proper negotiations,” he said.

SDLP leader Mr Eastwood said one of the big challenges ahead was Brexit. “There’s a lot of work to be done in the days ahead. But gaps can be closed and a comprehensive resolution can be agreed. All parties must be focused on delivering a new form of government,” he said.