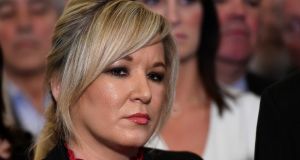 The North’s political parties should form a common position on Brexit during talks on restoring powersharing, the SDLP has said.

The call came on Monday, as a third week of post-election talks kicked off at Stormont and the British government announced it would formally start the process of leaving the EU on March 29th.

A deadline of Monday week has been set for restoring the institutions at Stormont.

SDLP leader Colum Eastwood said the beginning of the Brexit process “will maximise uncertainty at a time when we are working to stabilise our institutions”.

Even though the two biggest parties, Sinn Féin and the DUP, have taken opposing positions on Brexit, Mr Eastwood called for “political unity to defend the interests of our people”.

Ms O’Neill also said that when Theresa May visits ahead of triggering article 50, she will deliver a clear message to the prime minister that people living in the North oppose Brexit.

The Alliance Party’s Brexit spokesman, Stephen Farry, called for special arrangements to reflect the North’s unique circumstances and warned that triggering the two-year Brexit procedure is “leading the UK over a cliff edge. Northern Ireland needs a strong governmental voice to stand up and advocate for the interests of this region.”

Ulster Unionist Party MP Danny Kinahan described “a sad indictment of the last Northern Ireland executive that there is currently no executive in place to feed into the UK negotiating position”. He urged the British government to help “deliver the best deal” it could.

The Green Party leader in Northern Ireland, Steven Agnew, reiterated its view there should be a referendum on the final Brexit deal.

In Belfast, Sinn Féin deputy leader Mary Lou McDonald called on Taoiseach Enda Kenny to “take a stand over Brexit and act to secure designated special status for the North within the EU”.

If a deal on forming an executive cannot be struck by March 27th, likely options include a fresh election; new legislation to extend negotiations; some form of British-Irish partnership; or some form of direct rule from Westminster.

The Taoiseach has indicated that agreement had been reached between the Irish and British government on direct rule from London not happening if a deal is not reached by next Monday.

Downing Street subsequently issued a statement refusing to speculate on any outcome other than a devolved government and highlighted that “political stability in Northern Ireland is the responsibility of the UK government”.