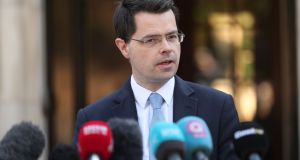 Northern Secretary James Brokenshire said he was extremely disappointed that there was no agreement to reinstate Stormont. Photograph: Niall Carson/PA Wire

There are just a “short few weeks” to break the political stalemate that is holding up restoration of the Northern Executive and Assembly, the Northern Secretary James Brokenshire has warned.

After the deadline for a deal passed at 4pm on Monday Mr Brokenshire refrained from calling immediate Assembly elections, as was threatened. Instead he indicated he would provide more time to determine if the parties – principally the DUP and Sinn Féin – could yet resolve their differences over issues such as the Irish language, the legacy of the Troubles, and Brexit.

“I don’t think there is any appetite for an immediate snap election. The public have only recently gone to the polls and delivered what I think is a very clear message of wanting to see devolved government back,” he said.

Mr Brokenshire also avoided any precipitate move to direct rule from Westminster but said that in the absence of an administration Stormont business would be taken over by civil servants. “We are rapidly approaching the point where Northern Ireland will not have an agreed budget,” he said.

“From Wednesday financial resources to allow Northern Ireland’s departments to deliver key public services will fall under the control of the Northern Ireland Civil Service,” he added.

Mr Brokenshire expressed a willingness to facilitate further talks but said there were only “a short few weeks” to get Stormont back up and running.

The Minister for Foreign Affairs Charlie Flanagan, who was engaged in the Stormont talks through the weekend and also on Monday, said that it was “particularly concerning that a vacuum in devolved government in Northern Ireland should now be occurring just as the island of Ireland faces up to the many serious challenges represented by the UK exit from the EU”.

“In these circumstances, all concerned must redouble efforts to achieve the re-establishment of power-sharing government in Northern Ireland, which is so plainly in the interests of all its citizens,” he said.

The leaders of the five main parties said they would participate in new talks. But there was recrimination between the main parties, the DUP and Sinn Féin.

The DUP leader Arlene Foster said the talks failed because “there was not a recognition of everyone’s mandate” and because a “spirit of compromise” was absent.

“We were willing to form an executive but Sinn Féin walked away,” she added. Sinn Féin had decided to pursue its own “narrow political agenda” even though the unresolved issues it raised could have been addressed in a new executive, she said.

Sinn Féin’s Northern Ireland leader Michelle O’Neill blamed the DUP for the latest breakdown, stating that there was no real movement on issues such as dealing with the past, the Irish language and equality. She accused the DUP of “blocking delivery of equality for citizens – that is the problem”. She said the DUP did not approach the talks “with the right attitude”.

“We will engage with all the other parties and try to find common ground on areas where we all agree. I think we can do that,” she added. “But what’s very clear and we are very strong on, we will not return to the status quo.”

SDLP leader Colum Eastwood called for an independent person to chair a new round of negotiations, and said in common with other party leaders that new elections would not achieve anything.