NI executive to be restored ‘when existing agreements honoured’ - SF 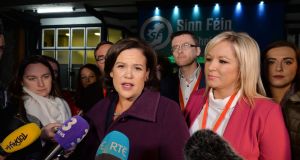 The Northern Executive and Assembly can only be restored “on a sustainable basis” when existing agreements are implemented, Sinn Féin deputy leader Mary Lou McDonald has warned.

Re-iterating the party’s stance on the crisis, she said to sustained applause that Sinn Féin remained “committed to full power-sharing in the North, to shared democratic institutions, to achieving an agreement on the basis of respect, equality and integrity.

“And we say again that agreement can only be secured and the institutions re-established on a sustainable basis when agreement s previously entered into are honoured.”

There has been no Executive or Assembly since January when Sinn Féin’s late deputy first minister Martin McGuinness resigned in protest at the DUP involvement in the renewable heat scheme scandal.

In the Saturday morning debate, Ms McDonald said: “Unionism has lost its majority in the Stormont Assembly. People in the North voted to remain in the EU.”

She said Brexit posed grave threats to the economy, “to our well being and to the Good Friday Agreement”.

She also reiterated the party’s commitment to a united Ireland and said the debate “has developed real momentum. We are united Irelanders.”

Ms McDonald also hit out at the confidence and supply agreement between Fianna Fáil and Fine Gael.

She said it “serves only to confirm that political establishment’s indifference an ability to act in the interests of the many, ordinary citizens”.

She said the two parties had been monopolising power for the past 100 years.

Sarcastically describing Taoiseach Leo Varadkar as “some craic” she criticised him for trying to “deny and minimise” the scale of the homelessness crisis.

He was a Taoiseach who “fights the corner of corporate tax avoidance, who defends a sweetheart deal with banks to avoid paying corporation tax for decades,” she said.

She said he had described her as cranky but added “Leo you haven’t seen cranky - not yet.”

Fianna Fáil leader Micheál Martin also came in for sharp criticism. Mr Varadkar “can’t get away” with what he was doing but for Fianna Fáil.

“Micheál is not cranky. In fact he’s very accommodating, obliging, docile, even.

“The occasional sham fight, a bit of political horseplay between Leo’s lads and Micheál’s lads. That’s all just a necessary party of the game of make believe that Fianna Fáil is a party of opposition.”

She said Sinn Féin believed in getting things done.

Some of the largest cheers of the morning and a standing ovation went to MEP Matt Carty who excoriated Fianna Fáil and Fine Gael.

He said the two parties had turned their back on the people of the North, and they had created an unequal State in the South.

One corrupted government followed another and “they built an economic model based on the begging bowl with tax avoidance policies” and the emigration of the young.

The Midlands/North West MEP said that the two parties constantly criticised Sinn Féin because “they know our fierce determination to build a new republic”.

It would be a “Republic of justice equality and fairness”.

He had particular criticism for Fianna Fáil, the party’s greatest rival for the electorate’s votes.

Fianna Fail wanted to leave a united Ireland to the next generation.