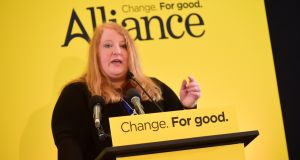 Alliance leader Naomi Long told her party’s conference in Belfast on Saturday that now is not the time to indulge in the “vanity project” of another Assembly election.

“Whilst others may secretly hanker for a period of direct rule or feel that another election may offer the chance of a better result for their party, we are clear that neither will solve the problems which face us today,” she said.

In her first conference address as party leader, Ms Long referenced the words of former US president Bill Clinton at the funeral of Sinn Féin’s Martin McGuinness on Thursday.

“Our peace process and our institutions are imperfect and unfinished,” she said.

“They are a work in progress. The clear message from voters was the one echoed by Bill Clinton in Long Tower Church on Thursday: ‘Finish the work.’”

In her speech, Ms Long raised concerns about an number of issues, including the fact the North was days away from the end of the financial year, “yet we have no budget”.

“We are days away from the triggering of Brexit, yet we have no Brexit plan,” she added.

“We are already overdue the Assembly vote needed to set next year’s regional rate, yet we have no Assembly.

Ms Long said it was essential “to get a functioning Executive established now and get back to doing the job that we were elected to do”.

Alliance had a strong performance in the snap Assembly election earlier this month, polling its highest number of votes since 1979 and its highest vote share since 1987.

More than 70,000 people voted for Alliance in the election, an increase of 50 per cent.

The party held its eight seats in the Assembly, despite each constituency dropping from six seats to five since the previous election.

In her address, Ms Long paid tribute to David Ford, whom she replaced as party leader last autumn.

She also highlighted five areas where reform was needed to address what she described as “the failings of the previous mandate”.

She said Alliance would like to see an end to the abuse of the petition of concern over socially progressive legislation such as marriage equality, and for an end to any one party being able to use the blocking mechanism to exercise a veto over others.

She said there was an urgent need to resolve legacy issues in the North, including ongoing paramilitarism, and for parties to address the costs of segregation and division in society.

She said Alliance would like to see plans to develop and promote integrated education.

She said the party wants to secure additional funding to ensure tuition fee levels could be maintained at current levels and to attract high-skilled jobs and opportunities aimed at creating a “more dynamic and balanced economy”.

She also spoke of “the murky influence” of some special advisers at Stormont, claiming the recent expenses scandals, the controversy over Nama’s Project Eagle sale and issues with the Social Investment Fund highlighted ongoing concerns about allegations of corruption, cronyism and greed.

“Nothing changes, except . . . the whiff of corruption is now rapidly [becoming] a stench which hangs heavily over the guilty and innocent alike,” she said.

“And with every fresh revelation, every new allegation, the public’s trust and confidence in politics and politicians is further eroded.”

She said the security situation in the North could no longer be used to justify a lack of public scrutiny regarding political donors, and her party would like to see “swift progress toward fully open and transparent politics”.

She said there was “an opportunity to deliver good government during the current talks process [for government] which we must not squander”.

Ms Long told delegates her party will focus on providing “good prospects for young people so that they build a future here rather than leave”.

She ended her address by pledging that Alliance would drive forward “a progressive, liberal, just and vibrant society” and “deliver change for good”.