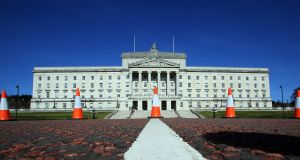 Fianna Fáil and Sinn Féin Senators clashed in the Seanad on Tuesday on the political impasse in Northern Ireland.

Fianna Fáil Senator Ned O’Sullivan said business leaders in the North had called on the parties to work together to restore devolved government in Northern Ireland.

“They stated that stable government was needed to guarantee peace, to attract investment, to deliver job creation and to advance social progress,’’ Mr O’Sullivan said.

He said he supported the business leaders’ statement, adding that a return to direct British rule would be seen as a retrograde step.

“There are always differences in politics, but the differences dividing the two main parties [in Northern Ireland] fade into insignificance when one thinks of the reality of the reintroduction of British rule in this country.”

Mr O’Sullivan said the last time he had spoken on the North in the Seanad he was chastised by Sinn Féin Senators, as if he had no right to speak on the issue.

“I am very proud of the record of my people and my background in getting the British out of our part of the country,’’ he said.

In response, Sinn Féin Senator Trevor Ó Clochartaigh said: “They left the six counties behind them.’’

Mr O’Sullivan said he would not be silent when other people were in a position to keep direct British rule out of the North.

He called on those people to work on achieving that.

Mr O’Sullivan said it was time to grow up when it came to this issue.

“We cannot be calling on the British prime minister, the American president and everybody else around the world to jump to attention,’’ he said.