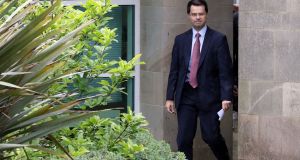 Northern Ireland secretary James Brokenshire is due to outline the British government’s next move in the House of Commons in the afternoon. Photograph: Paul Faith/AFP/Getty Images

Sinn Féin and the DUP remained deadlocked on key issues on Sunday night as Northern Secretary James Brokenshire decides whether to allow the Northern political parties extra time this week to reach agreement to restore the Northern Executive and Assembly.

The British and Irish governments will take stock today on whether a deal is still possible this week. Mr Brokenshire is due to outline the British government’s next move in the House of Commons in the afternoon.

He has the options of calling fresh Assembly elections, instituting direct rule by British Westminster ministers, or providing more time for the DUP and Sinn Féin to reach a deal.

The latter option could involve putting back the deadline until the early autumn or providing some extra time this week for the parties to strike a deal. After that, with the Twelfth of July looming, Northern Ireland enters the summer marching season when prospects for political agreement are poor.

It is unclear what course of action Mr Brokenshire will take. That may depend on what emerges from Monday morning’s talks at Stormont and whether there are any indications either or both the DUP and Sinn Féin would move from hardline positions to make some compromises to facilitate agreement.

The two main parties remain at loggerheads over a number of matters such as same-sex marriage and a bill of rights for Northern Ireland. But the main issue at play is the dispute over the Irish language with Sinn Féin demanding a stand-alone Irish language act and the DUP expressing fears how such legislation might be applied while insisting on more composite legislation that would incorporate Ulster Scots.

“A deal is still do-able, but whether that will happen is down to how badly the parties want it done, and that is hard to gauge at this stage,” said a senior London source yesterday.

Commentary from DUP and Sinn Féin politicians over the weekend pointed towards the negative although at such critical negotiating periods no one was expecting either party to concede their bottom lines for a deal.

The former DUP finance minister Simon Hamilton said that Sinn Féin could not “demand a 10-0 win” on all issues. He urged Sinn Féin to “change its attitude and approach” to the negotiations.

Mr Hamilton said the DUP wanted a “good deal” that was “fair” to all sides. “At this minute in time, that requires Sinn Féin to change its attitude and its approach to these talks and not demand the sort of 10-0 win it’s looking for,” he told the BBC’s Sunday Politics programme.

“Instead, work with us together and build on the progress that we have been making over the talks to get a fair, a sensible and a balanced deal that can be supported by all sides of our community,” he added.

The Sinn Féin president Gerry Adams complained that the DUP wasn’t prepared to move on critical issues. “The DUP are showing no urgency about dealing with the equality and rights issues, which caused the collapse of the political institutions. There is little prospect that they will do this before Monday,” he said.

There were more negotiations on Saturday at Stormont but little progress, according to senior sources.

The DUP leader Arlene Foster took some time off to attend a wedding but returned to the talks in the afternoon.

The Sinn Féin team led by Mr Adams broke from the talks in the afternoon for the same-sex marriage parade and rally in city centre Belfast.

There were no talks on Sunday, a day on which the DUP traditionally avoids political engagement.