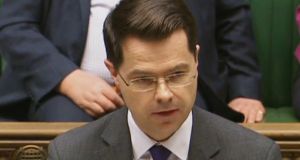 Northern Ireland’s political parties have been asked to participate in another round of talks from Monday in a bid to resolve the political crisis.

Northern Ireland Secretary of State James Brokenshire has invited the parties to take part in the talks process at Stormont Castle.

The UK and Irish governments said they want the talks to have an agreed agenda and regular round-table meetings.

A deadline to form a powersharing executive was missed on Monday after talks to restore the institutions broke down when Sinn Féin said it would not nominate a deputy first minister.

However, Mr Brokenshire said he believed there was still a window of opportunity for parties to reach an agreement and there was no appetite for new elections

“The talks will have two objectives. First, to secure a coalition agreement to form the basis of the formation of a new Executive.

Minister for Foreign Affairs Charlie Flanagan said as a co-guarantor of the 1998 Good Friday Agreement “the Irish Government is determined to uphold its principles and protect its institutions”. “In the days ahead we will work with all concerned to this end”.

“I believe it is critically important to see devolved Government restored and working effectively in the interests of the people of Northern Ireland, in particular in the context of Brexit.”

Following the results of the snap Assembly election on March 2nd negotiations aimed at striking a deal on a range of issues collapsed the day before the March 27th deadline when Sinn Féin said the talks process had run its course.

The party’s Northern Ireland leader Michelle O’Neill said both governments and the DUP had failed to step up to the plate. DUP leader Arlene Foster said Sinn Féin was “not in agreement-finding mode”.

There had also been accusations from the SDLP and others that the last talks process was “shapeless”.

The SDLP is thought to be disappointed an independent chair will not lead the new talks, as it does not view Northern Secretary James Brokenshire as a neutral arbiter on issues such as the legacy of the past.

SDLP leader Colum Eastwood called on all parties to come to the reconvened talks process “with a firm focus on resolution of all the challenges to forming a power sharing Executive”.

Mr Eastwood said: “The public is absolutely furious and they will not accept further failure. “The triggering of Article 50 and the stark warning of the Lord Chief Justice should focus minds in the days ahead.

“If power sharing cannot be re-established now, there is a serious threat that we’ll lose power over our affairs for a very long time. We cannot allow that to happen.”

Mr Brokenshire has given the parties until the Westminster Easter recess ends to reach a deal or he will seek to introduce legislation to deal with budgetary issues around rates bills.

If a deal is not reached after April 18th a fresh election could be called or some form of direct rule introduced.