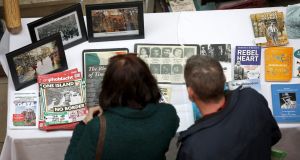 Books, pamphlets and pictures are seen for sale at Sinn Fein’s ardfheis in Derry. Photograph: Paul Faith/AFP via Getty Images

Delegates at the Sinn Féin ardfheis in Derry have rejected a motion that would have limited the party’s ability to enter into a coalition government in the South after the next general election.

The conference adopted a motion stating that that party was “committed to being in government North and South” and rejected a contrary motion from the west Cork comhairle ceanntair or district council that Sinn Féin should only go into government in the Republic “as the largest party”.

Sinn Féin MEP Matt Carty, in urging delegates to reject the west Cork motion, said: “When we do go into government things will change”.

“We will make the banks and the corporations pay their taxes. We will end the rip-off of families and workers,” he said. “We will expand public services ensuring that our health and education systems work for everyone, regardless of their wealth or where they live, We will address, historical failures that have created economic inequality and regional imbalance and we will support job creation in every corner of the country. We will unite Ireland.

“These are the standards by which we will judge any government prospects and if we can’t move towards these objectives then we will not go into government. It is as simple as that.”

Mr Carty said Sinn Féin would take on the various vested interests, “the landlords, the big industrial polluters, the millionaires of the insurance industry and the bankers”.

Delegate Michael McCarthy urged support for the west Cork motion. “We have to be the generation that sees Fianna Fail and Fine Gael packing their bags from Leinster House,” he said to applause.

Mr McCarthy added, “Sinn Féin means we ourselves, not we ourselves and Fianna Fail and Fine Gael. Let’s send a strong message from this ardfheis to Micheal Martin and Leo Varadkar, that it’s only a socialist programme for government that Sinn Féin will enter. So unless you republicanise and radicalise your politics, build for housing, build for unity and develop socialist principles then we have no business in doing business with both parties.”

Another delegate supporting the west Cork motion, speaking in Irish, spoke about previous coalition governments and referring to Labour and the Greens asked, “Ca bhfuil siadanois?”

The ardfheis rejected the west Cork motion and adopted a motion from the Sinn Féin national youth committee and from cumainn in mid Tipperary and Drumkeeran, Co Leitrim which stated that any decision relating to entering government “will only be made by a special ardfheis”.

The motion stated that any coalition programme for government must include commitments on “progress towards a united Ireland”, a large scale housing programme and fundamental reform of the taxation system.