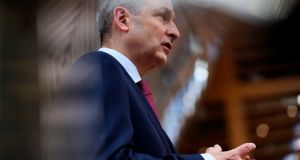 The appointment of the Secretary-General of the Department of Public Expenditure, Robert Watt, to the board of the Football Association of Ireland (FAI) was criticised as completely wrong and “a total conflict of interest” at the Fianna Fáil parliamentary party meeting on Wednesday.

The Sligo TD Mark MacSharry told the meeting of party TDs and Senators the Government was wrong to have allowed the appointment of Mr Watt to go ahead.

Mr MacSharry did not mention Mr Watt by name but said he was not a Government representative on the board but an independent director. The conflict of interest arose, he claimed, because the FAI was in receipt of State money which was ultimately controlled by Mr Watt’s department.

He said he agreed with former minister for sport Shane Ross who was uneasy about the appointment of the top civil servant to the board.

Colleagues said Mr McSharry alluded to the Government facing the biggest economic crisis in the history of the State yet (Mr Watt) sitting on the FAI board.

Mr Watt is one of four independent directors along with chairman Roy Barrett, Catherine Guy and Liz Joyce.The appointment approved by the FAI board earlier this week.

Mr MacSharry spoke at the end of a meeting that lasted for three-and-a-half hours, but which contained little rancour.

In a ten-minute speech that was loudly applauded, he said the party’s backbenchers would give loyalty and cohesion to its Ministers as long as there was shared ownership of the Government’s decisions.

He said that he did want to be “blindly defending Fine Gael policy that we have opposed for four years without our fingerprints evident on it.”

He also told the meeting the continuation of Dáil sittings in the Convention Centre at huge expense to the taxpayer was a “disgrace”. He said that if Leinster House was not safe, it would mean that people would be “dropping like flies” in his local Supervalu which was not the case.

The meeting was dominated by discussion on the July stimulus which will be announced on Thursday. Minister for Public Expenditure Michael McGrath answered questions from over 20 TDs and Senators relating to specific sectors, and clarified information which is already in the public domain.

In his speech, Taoiseach Micheál Martin was highly critical of Sinn Féin. Focusing on the party’s contribution in the Dáil, he told colleagues its outlook was anti-Europe and also anti-enterprise.

A number of speakers expressed concern that so far in Government, Fianna Fáíl Ministers had not sufficiently got the party message out. Some referred specifically to the messaging around the ‘Green List’ and claimed Tánaiste Leo Varadkar was trying , with a video sent out on social media on Wednesday , to claim ownership of the announcement.

Early in the meeting, there were complaints that leaks from the meeting were being leaked and were being put out live on Twitter. In response, the Longford Deputy Joe Flaherty and Minister of State Mary Butler both said they had no difficulty handing up their phones to the front desk. All but six or so of their colleagues followed suit.