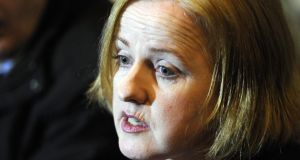 The Anti-Austerity Alliance and People before Profit are to join forces in a bid to form new left-wing party.

In a statement, the two groups confirmed they have notified the Registrar of Political Parties to formally register ‘Anti Austerity Alliance-People Before Profit’ to contest the General Election, in which they expect to field up to 40 candidates.

Mr Higgins, Ms Coppinger and Mr Murphy were all elected as Socialist Party TDs. They formed the Anti-Austerity Alliance in late 2014. Mr Boyd Barrett was elected as a People Before Profit TD in Dún Laoghaire.

They hope to have significantly enhanced speaking time and rights in the next Dáil as part of a formally recognised group.

“The Registrar has accepted our proposal for a merged Dáil party and it is expected to take effect in three weeks after the period of public notification, at which time we will formally hold a press conference with further details,” they said. “With the backdrop of a radicalisation in Irish society, a growing rejection of the traditional establishment parties and, in particular, the active movement against water charges, the left can make gains in the upcoming general election.”

The newly formed alliance will campaign against the introduction of water charges, abolishing the Universal Social Charge for low and middle income earners and the imposition of austerity.

“Despite the best efforts of government to talk up the ‘recovery’, it is evident to the majority of workers and the unemployed that it is a ‘recovery’ based on low pay, casualisation and permanent austerity,” the TDs said.

“The housing and homeless emergency engulfing communities – and unchecked by government – can only be resolved by large-scale building of social and affordable homes by the State.”

Convicted fraudster surrendered to UK authorities 16:27
Minister criticises ‘whiff of xenophobia’ to some TDs’ comments on quarantining 16:27
Burglar jailed for sexually assaulting woman who awoke with his hand on her throat 16:32
Woman jailed for assaulting a family friend who was trying to break up a fight 16:07
Judge sanctions €7,500 settlement for child over lip injury 15:45