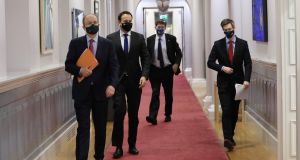 The latest Irish Times/Ipsos MRBI poll shows voter satisfaction with the Government continuing to descend from the mountain high rating it reached in the early days of the pandemic. From a peak of 72 per cent, satisfaction has dropped to 43 per cent, as voters turn from looking for a port in the storm to a way out of the harbour.

Fine Gael is confirmed as the most popular party in Ireland, with 30 per cent support, although a drop of five points since our October poll means their lead over Sinn Féin has narrowed.

5 Fintan O’Toole: Prince Philip - asylum-seeker and citizen of nowhere, but rich and white

11 Can I see copies of earlier wills my mother wrote?

13 ‘He’ll be missed’: Locals turn out to say goodbye to popular shopkeeper

16 Q&A: Where do we stand on AstraZeneca vaccine now it is restricted to over-60s?

17 Coronavirus: 358 new cases and 18 further deaths reported in the State

19 How supermarkets trick us into buying unhealthy food, and what we can do about it

24 Covid-19: AstraZeneca vaccine should not be given to patients under 60, Niac advises as appointments cancelled

26 Mary Coughlan revisits her past: ‘It was everywhere. Bags of cocaine, champagne and tequila’

30 Louis Theroux: ‘I worry about giving offence, being judged, not coming up to scratch’

31 My Bloody Valentine: Very loud, very fuzzy, and heading back to their Irish studio

32 ‘Fame? If you have any personal demons, you’re quite not prepared for it’

34 Ken Early: It’s time for Alexander-Arnold to move to the middle

36 Evictions can recommence from April 23rd

40 Q&A: Which Level 5 restrictions are being lifted from today?