Never have so many got so few predictions right, writes Harry McGee

Fine Gael and Fianna Fail coming together to form the next government is looking more and more likely says Irish Times political correspondent Fiach Kelly, reporting from the count centre at the RDS. Video: Bryan O'Brien 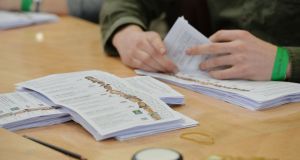 Sinn Féin will make gains but they may also lose out where they were expected to win. Photograph: Alan Betson / The Irish Times

Elections should be looked at through the prism of Star Wars series. You always know that no matter how dramatic one episode ends, there’s another one coming down the line.

It’s very early days. The tallies are still continuing apace here at the RDS where five Dublin constituencies will be decided. But already we are seeing very strong patterns emerge.

And the strongest by any yardstick at the moment is the comeback of Fianna Fáil. It’s one of those Darth Vader moments.

While no count has yet been completed, it looks - incredibly - like Fianna Fáil will get north of 40 seats and might even get more seats than Fine Gael. I’m not so sure that that prediction will materialise. There will still be a small but discernible gap between both parties.

Still, you can’t deny it has been Fianna Fáil’s day, so far - early and all as it is. The party was eviscerated in 2011 and after Brian Lenihan passed away it held not a single seat in Dublin. Now, there’s no doubt that the Fianna Fail empire is striking back, and it looks like at the expense of Fine Gael.

So where is Fianna Fáíl making gains? Everywhere, and surprisingly in the capital. Jim O’Callaghan, who was a dark horse, looks like he is a live contender in Dublin Bay South and may be in a big battle with Chris Andrews for a seat. Sean Haughey in Dublin Bay North and Jack Chambers in Dublin West both look set to take seats, as do Darragh O’Brien in Dublin Fingal, John Lahart in Dublin South West, and John Curran in Dublin Mid West.

Outside Dublin, Fianna Fáil has also done well, with a chance of getting two seats in a surprising number of constituencies, including Mayo and Cavan-Monaghan and picking up a seat in all other constituencies, perhaps even Roscommon-Galway where Eugene Murphy might sneak in ahead of Fine Gael’s Maura Hopkins.

There’s another clear trend and that it is turning out to be a really dismal day for the Labour Party. The party might end up with two or three seats in the capital, but even then nothing is certain.

Party leader Joan Burton is in a battle for the last seat in Dublin West, while Aodhan O Riordáin has a slim chance in Dublin Bay North, as has Brendan Ryan in Dublin Fingal.

Even in the most solid constituencies like Kildare North ad Longford-Westmeath, both Emmet Stagg are Willie Penrose are in bother. Both are struggling.

In a rare glimmer of good news for the party, however, Mark Wall seems to be holding his own in Kildare South.

Sinn Féin will make gains but they may also lose out where they were expected to win. Trevor O Clochartaigh is doing very well in Galway West as is Eoin O’Brien in Dublin Mid West, but candidates for whom the party had high hopes including Chris Andrews in Dublin Central and Paul Donnelly in Dublin West may just be edged out.

Conversely, the Independents and smaller parties are all doing well with a lot of new unfamiliar names. They include Boxer Moran in Longford-Westmeath, Sean Canney in Galway East, Gary Gannon of the Social Democrats in Dublin Central and Michael Harty in Clare.

Long after the dust has settled in this election, there will be lots of soul-searching about this proposition: Never in the history of mankind have so many got so few predictions right. At this moment, the opinion polls nor the political commentariat didn’t catch the extent of the demise of the Government parties, or the upsurge in Fianna Fáil numbers, until very very late. Was the swing so late? And Fine Gael in particular seems to have struck a tin ear to voters with its election strategy.

How did a party which drove the country into the arms of the troika, effectively losing Ireland’s control of its own sovereignty in the process, recapture such a high level of support (albeit well below historical levels).

I think we will find that there are many people out there who are still culturally and viscerally Fianna Fáil and who were looking for any excuse to return to it. A strong campaign by Micheál Martin would have certainly eased that passage.

Now as we approach early afternoon, the lie of the land looks convoluted, complicated and plain messy.

Where will it all lead us? If it is to a promised land, it’s certainly going to be via the cross country route. And a log one at that. Judging by what we have seen so far it may even involve a Luke Skywalker detour around the Skellig Islands.