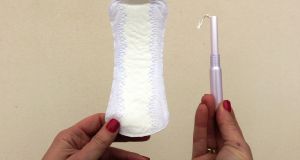 It estimated the cost to women of menstruating ages of such products is equivalent to €208 a year and €8,100 over a lifetime. Photograph: Getty Images

An all-party motion calling on the Government to provide free sanitary products for women won overwhelming support in the Dáil on Tuesday.

The motion, tabled by the Oireachtas parliamentary women’s caucus, called for the provision of sanitary products and menstrual information in all public buildings, including schools, universities, direct provision centres, refuges, Garda stations, hospitals and prisons.

The measure is proposed as a way to tackle “period poverty” and to “de-stigmatise and normalise menstruation”.

Ireland should work with other EU states to have VAT removed on sanitary products, the motions also proposed.

The obstacles encountered by homeless women, teenage girls afflicted by poverty and women asylum seekers living in direct provision were brought up by TDs from all sides of the House when the motion was debated on Wednesday.

The chair of the women’s caucus Catherine Martin told the Dáil that this was the first of many motions that would be brought on equality issues in the months to come.

Fine Gael TD Marcella Corcoran Kennedy told the Dáil it was not an issue just for other countries but for Ireland too.

She said women’s health was seen through a peculiar prism despite menstruation being a regular occurrence.

“The female reproductive system has been viewed as unclean in many countries, including our own.”

She added that it was a normal bodily function over which women had no choice.

The Independent TD for Clare, Michael Harty, told the Chamber that the debate on period poverty was a “sign of the growing confidence and maturity of the Dáil.

“It is a sign that we are moving on in Ireland, that we can discuss such issues in an open forum,” he said.