Opposition TDs have staged a walkout from the Dáil chamber over the cancellation of a debate on the Guerin Report. 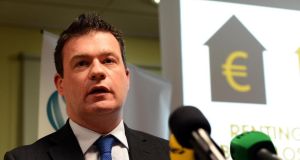 Minister for the Environment and Labour Deputy Leader Alan Kelly: made his comments at the weekly meeting of the Labour parliamentary party. Photograph: Eric Luke / The Irish Times

The Opposition staged a Dáil walkout yesterday after Mr Barrett ruled there would be no debate on the establishment of a Commission of Investigation into claims of Garda malpractice because of a connected legal action being taken by former minister for justice Alan Shatter.

Speaking at the weekly meeting of the Labour parliamentary party, Mr Kelly criticised Mr Barrett’s ruling. He felt that such a ruling could lead to a scenario in the future that someone could go to the courts and seek a judicial review. This would have the effect of avoiding parliamentary scrutiny.

Sources at the meeting also said Mr Kelly spoke of a “constitutional crisis” while others said he was severely critical of Mr Barrett. It is understood Mr Kelly made his contribution at the end of the weekly meeting, in an intervention that surprised those present.

Mr Barrett has been embroiled in a number of controversies recently and last month accused Sinn Fein of using him as a “pawn” to deflect attention from their own difficulties. He also suggested he may step down from his role before the general election but later said he intends to serve his full term.

Mr Guerin was hired by the Government to report into its handling of allegations by Mr McCabe and his conclusions were highly critical of the Department of Justice. Mr Guerin’s report also led to Mr Shatter’s resignation. The Dublin South deputy has taken a High Court action to overturn some of Mr Guerin’s findings.

According to a note given to TDs, the Ceann Comhairle “has indicated that, while the draft Commission of Investigation (Cavan/Monaghan Division of the Garda) can be moved tomorrow, there can be not (sic) debate re same, as it would be in conflict with Standing Orders 57, as the matter is currently sub judice”.

Mr Barrett did not specifically reference the Shatter case, but sources said it was the case in question. A spokeswoman for the Oireachtas said “the Ceann Comhairle has the power to either allow or disallow debate on a matter that is sub judice”.