Advice on €3bn broadband plan must be published – Fianna Fáil

Investment is of ‘huge public concern’, writes Barry Cowen in letter to Minister 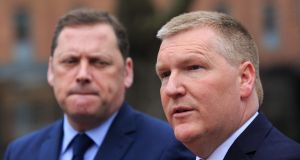 Barry Cowen is calling for all advice concerning the national broadband plan to be made public. Photograph: Gareth Chaney Collins

The party’s public expenditure spokesman Barry Cowen wrote to Mr Donohoe on foot of an article in The Irish Times which revealed that senior officials had advised that the plan “did not represent good value for money”.

Mr Cowen referenced the article and wrote: “This is obviously a huge public concern. A €3 billion investment of taxpayers’ money over a 25-30 year time frame to cover the 25 per cent of homes without broadband is an exceptionally large investment and advices such as this cannot and should not be ignored.

“I am writing to ask whether there is any advice such as this in your department and if so whether you will publish these advices and responses to same.”

Mr Cowen said that as there is “only one bidder left in the process this advice is surely not commercially sensitive”.

“Given the extent of the tax payers money involved and given that this was originally estimated to cost the state €500 million I believe it is in the public interest to publish these advices and responses to same before any decision is made.”

Fianna Fáil leader Micheál Martin rowed in behind the calls to publish all advice on Sunday after it was reported that the secretary general of the Department of Public Expenditure Robert Watt had voiced concerns about the plan.

Mr Martin said it is “time for full transparency from the Government in relation to the national broadband plan”.

“It’s heading towards being the most expensive National Broadband Plan in the world. It started out at €500 million of a subvention. It’s now gone to €3 billion. Other questions I’ve already raised publicly with the Taoiseach. Does this consortium have the capacity to deliver this plan? Who will own the asset at the end of the 25 years?

“We need full transparency in relation to it. I think we’ve had eight years of failure to deliver broadband to rural Ireland. It would represent the game-changing factor in terms of business and in terms of connectivity for rural Ireland and it’s extraordinary that since it was first launched in 2012 we’ve had no progress on it. It’s been a botched procurement exercise.

“I’d like a full announcement of a decision by Government but also critically transparency in terms of the advice the Government have received around this proposal. What advice has the Minister for Public Expenditure received from his officials and has he communicated that to the Minister for Finance and to the Taoiseach?”