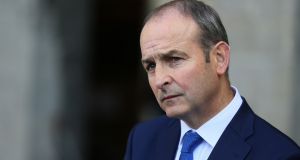 Fianna Fáil leader Micheál Martin has insisted his party will not enter any arrangement with Sinn Féin, but many of his TDs have said it must be considered in the future. Photograph: Brian Lawless/PA Wire

Mr Adams was responding to a report in The Irish Times about a motion to be debated at the Fianna Fáil ardfheis ruling out entering coalition with Sinn Féin in the future.

The motion will call on the ard comhairle, the party leadership and the parliamentary party to explicitly outline their view that “under no circumstances will Fianna Fáil enter a coalition government with Sinn Féin”.

In a statement, Mr Adams said the party was putting the “narrow self-interests” of the Fianna Fáil leadership ahead of the country.

He said: “Budget 2018 exposed the nonsense of Fianna Fáil as an opposition party. The reality is that Fine Gael and Fianna Fáil are natural bedfellows with similar policies.

“The first item on Fianna Fáil’s ardfheis agenda should be how these two conservative parties can set aside issues of ego and history, and amalgamate. Such an amalgamation would be an entirely logical development.”

Mr Martin has insisted Fianna Fáil will not enter any arrangement with Sinn Féin, but many of his TDs have said it must be considered in the future.

Carlow Kilkenny TD John McGuinness, Cork East TD Kevin O’Keeffe, Roscommon TD Eugene Murphy and James Lawless of Kildare North have all stated the party should be open to such a coalition.

The party’s justice spokesman, Jim O’Callaghan, also raised the prospect of a confidence and supply arrangement, but Mr Martin has insisted this is also not an option.

Mr Adams said the concentration of attacks on Sinn Féin is about trying to stifle alternative parties.

He added: “A Fine Gael/Fianna Fáil merger would be healthy for politics in this State. It would bring an end to what is clearly a sham and draw a clear ideological line in the sand.

“In reality, Micheál Martin and Leo Varadkar should be at the same ardfheis, speaking from the same platform.”

The Fianna Fáil ardfheis, which takes place at the RDS this weekend, will also hear calls for the party to field a candidate in the presidential election which is scheduled to take place late next year.