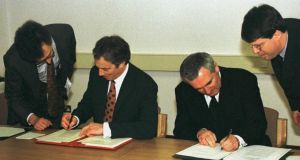 ‘Parties to the Belfast Agreement (1998) were very conscious of the situation of victims.’ Above, British prime minister Tony Blair and taoiseach Bertie Ahern signing the agreement. Photograph: Dan Chung/Reuters

Most people whose concern is that peace in Northern Ireland and the institutional arrangements that underpin it should endure will have been unsettled by events of the last week.

The arrest of Sinn Féin leader Gerry Adams and his interrogation for four days at Antrim police station, not only about the murder of Jean McConville 42 years ago but about his whole life in the republican movement, have no precedent since the days of Parnell.

The murder and disappearance of Jean McConville, widowed mother of 10, a Protestant in a mixed marriage who sought refuge in west Belfast from loyalists, was, regardless of pretext, a cruel and heinous act. Proving responsibility is very difficult. Such deeds, many almost forgotten, have left grieving families suffering a life sentence. Dark forces were at work, sometimes including state elements; the one creating the most victims, even in its own community, was the Provisional IRA.

The Belfast Agreement was not just negotiated between opposing political parties. It involved the taming of dark forces, by persuading republicans and loyalists that there existed a balanced alternative democratic way that would allow the peaceful resolution of deep-seated differences peacefully in the shorter and longer term, while allowing people to get on with their lives in a more normal atmosphere.

Parties to the agreement were conscious of the situation of victims. Paragraph 2 states: “We must never forget those who have died or been injured and their families. But we can best honour them through a fresh start . . .” As Nancy Soderberg, president Clinton’s deputy national security adviser, argued in a powerful article in the Financial Times on Monday, the allegations against Adams should not be used to justify an intensification of “the righteousness of the victim”, further delaying the necessary compromises.

De facto amnesty
The agreement sought to draw a line under the past. Qualifying prisoners belonging to an organisation on ceasefire were released within two years, regardless of their convictions. It was a de facto amnesty, later extended privately to on the runs, where evidence was not sufficient. It was not envisaged that anyone would be charged with prior membership of a paramilitary organisation or a directing role in the absence of new activity or offence. As Nancy Soderberg notes, it is Adams’s past IRA association that enabled him to exercise the influence that brought about a ceasefire, and later disarmament and dissolution.

No one foresaw that internal opponents of the peace process would become so embittered as to testify against Adams, albeit as part of a research project under supposedly guaranteed lifetime confidentiality.

The Boston tapes project may have been modelled on the Bureau of Military History statements collected 50-60 years ago from survivors of the independence struggle, which only became generally available after everyone’s death. With a broad consensus behind the independence struggle, no one faced prosecution by the State for their part in it. Those collecting the statements acted impartially.

The Boston tapes in contrast have been a complete debacle, having been commandeered by the PSNI, prejudicing any future project. Apparently, with great foresight – or was it foreknowledge? – British law was changed 10 years ago to permit the admissibility of such statements, even where people were dead. Anthony McIntyre has engaged before, during and after the project, in repeated polemical attacks on the Sinn Féin leadership’s conduct of the peace process, suggesting a more immediate political, and not just a long-term scholarly, intention.

To give just one instance, in his collected articles Good Friday: The Death of Irish Republicanism, he refers in April 2004 to “the nauseating spectacle of Sinn Féin at the Republican plot”. Ed Moloney in his foreword argues that the Adams-McGuinness leadership employed “ambiguity, deception, dishonesty, betrayal, duplicity etc”, calls their allies “a bunch of authoritarian Stalinist control freaks”, and expresses frustration that Adams and McGuinness have managed to escape “Houdini-like from the straitjacket of IRA violence”.

Are these examples of the spirit of “professionalism and detachment”, which, Moloney claims, informed conduct of the project? What possessed Paul Bew, now Lord Bew, distinguished historian, former unionist adviser, and present chairman of the British-Irish Association, to recommend people who were more crusading journalists than academics to manage it?

None of this is to say that all three were not appalled at the later turn of events. Moloney and McIntyre tried every legal avenue to stop the handing over of the tapes.

‘Public interest’
Boston College is right to question why the British government, with its huge investment in the peace process, allowed the PSNI to subpoena the tapes, when it has no difficulty “in the public interest” in preventing the law from taking its course in relation to following up evidence which implicates members of the security forces? Did the Irish Government express any reservations about it?

While tension has been somewhat relieved in the short term by Adams’s release without charge with a file going to the Public Prosecution Service, and by strong statements of continuing Sinn Féin support for the police despite destabilising doubts having been earlier expressed, this episode has given warning that relations within the Executive are brittle, and that tensions must be reduced by an agreement on outstanding issues covered in the Haass report.

American mediation to be successful requires the active input of the British and Irish governments. Recent statements suggest that they recognise the danger. The electoral fall-out from what has happened is quite uncertain.

Martin Mansergh is a former Northern Ireland adviser and politician

Judge orders release of woman who poses ‘imminent’ risk to mother 12:19
Flu vaccine delay should be resolved by end of October - IMO 12:18
Covid-19: Restaurant industry left ‘in a vacuum of the unknown’- RAI 12:06
Further restrictions expected for Dublin if Covid-19 infection rate does not stablilise 12:01
Rise in Covid-19 hospitalisations ‘a very concerning trend’, says Paul Reid 11:37