Abortion vote: The result of referendum is no foregone conclusion

Inside Politics: The last week of campaigning will be intense and decisive 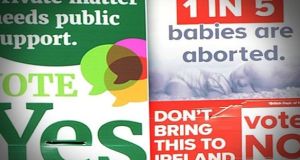 It’s an opinion poll day. Today The Irish Times publishes its last opinion poll of the campaign with just over a week to go. The results confirm what we all expected: the gap between the Yes and No sides is closing. The result of the referendum - in which the Yes side has consistently held a strong lead - is no foregone conclusion. But based on today’s numbers, it is considerably more likely that the Yes side will win. That is by no means certain though - the contest is still very much alive.

Excluding undecideds and those unlikely to vote, the Yes side leads by 58 per cent to 42 per cent - a lead of 16 points, pretty hefty in the week before polling. But in the last poll, taken in mid-April had the lead at 26 points. So the Yes lead has tumbled a bit. But if the No side is to change the trajectory of the campaign, the Yes lead will have to tumble a lot further and a lot quicker. That is possible, but it is not likely.

6 Oscar Wilde, my grandfather, ‘talked himself into prison’

9 Leinster and Larmour leave it late to break Munster hearts

11 ‘I got a burning smell in my nose’: Third-wave Covid-19 patients share their experiences

12 Ireland’s lost golf courses: What happens when the gates close?

13 Garda trauma: Sean was a garda for six weeks when he saw his first body

16 Teaching was Jerry Kiernan’s vocation; in 30 years he never missed a day

21 Man who sexually assaulted woman on Luas tram is jailed

24 Covid-19 infection rate in hospitals ‘out of control’

27 Behind Her Eyes: Eve Hewson could have found star-making role in Netflix thriller

29 Two arrested as cannabis worth €1.2m and firearm seized by gardaí

31 Cold and working from home? How to stay warm without whacking up the heating

33 Coronavirus search: See how Covid-19 is spreading in your area

34 Miriam Lord: Healy-Rae scooting around and giving the Honda 50 a run for its money

35 Covid-19 and travel: Quarantine and increased Garda checks near Dublin airport on cards

39 Remote working ‘revolution’ bringing people back to towns and villages