Undecideds swung in huge numbers to Yes, as politicians struggled to keep up with pace of change

Politicians, politics and the media are playing catch-up to the people in the aftermath of the landslide result in the abortion referendum. Sarah Bardon reports. 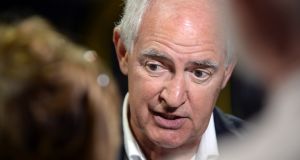 “Doctors, or a majority of them, had swung, too, against the Eighth, and the public always looks to experts in such circumstances.” Above, Peter Boylan during the count. Photograph: Cyril Byrne

Politicians and politics are playing catch-up, following Friday’s vote. It happened before, with contraception, divorce and homosexuality. Now it has happened with abortion.

It’s not so much that the vote will change our society, but rather that it signals that society has already changed. It has conceded to women power over their own lives that had been previously withheld by the State.

The political significance of the result will take time to filter through fully. Disregard most of the excitable stuff this weekend; it’s to be expected. People get carried away. They are entitled to do so; that is the nature of these things. Remember the marriage equality referendum was also supposed to change Irish politics for ever. Analysis is best done soberly and impartially.

But it’s possible to say a few things with reasonable certainty. Firstly, legislation on abortion, which would have faced parliamentary trench warfare if the vote had been close – will sail through the Oireachtas. Few anti-abortion TDs will stand against them.

The second is that the referendum will boost politicians who backed it commensurate to their importance – so Simon Harris and Leo Varadkar, Micheál Martin and Mary Lou McDonald are big winners.

That is a bit unfair to the politicians of the left who doggedly insisted on wedging this issue on to the political and parliamentary agenda when nobody from Fine Gael and Fianna Fáil was interested – to Clare Daly, Bríd Smith, Ruth Coppinger, Mick Wallace, Katherine Zappone and the rest of them – but it how these things tend to work.

There are obvious implications for Fianna Fáil. The party looks less like modern Ireland than its rivals

But the warm glow these politicians will get from Saturday’s cheers will not last. Ireland’s voters have spoken on abortion, but few of them have regarded it as the most important issue when it comes to elections.

The distinction will be lost on many in the fuzzy afterglow of triumph, but a single issue campaign – even when it achieves great momentum – is not the same thing as a political movement.

There are obvious implications for Fianna Fáil. Lots of its TDs opposed repeal; the party’s voters (just about) opposed repeal. The party looks less like modern Ireland than its rivals. That matters. Still, the referendum reinforces Martin’s importance to his party, and so bolsters his authority, however much many of his TDs may resent it.

Far from showing that politics is irrelevant, the referendum and the process that preceded it reinforces the importance of politics as the essential path to social change. Slow and reluctant maybe; but essential nonetheless.

Laws are changed by TDs, so new ones must be elected, or older ones convinced for change to happen. Over a period of several years, both changes occurred.

The Yes side started with significant advantages. Ireland was becoming steadily more liberal; female voices are stronger and more central to national debate than they have ever been.

Doctors, or a majority of them, had swung, too, against the Eighth, and the public always looks to experts in such circumstances. Equally, all party leaders were in favour of repeal.

But most important of all, for a long time now – at least since The Irish Times began to poll regularly on attitudes to repealing the Eighth Amendment two years ago – there has been a large, consistent and convinced majority in favour of making legal abortion more widely available. That, in a nutshell, was the biggest factor in this campaign.

Mostly, the soft Yes and middle-ground voters came home to the Yes campaign because, ultimately, they wanted to

But it was never a foregone conclusion. While the polls attested constantly to the Yes advantage, they also showed that a substantial minority – a blocking minority perhaps – of those Yes voters had significant doubts about the Government’s proposal to legalise abortion on request up to 12 weeks. How they overcame those doubts and settled comfortably into the Repeal camp on polling day is the story of this campaign, and of the great social change that it reflects.

There was and is a large bloc of committed repealers, who have grown up with the Eighth Amendment, have been affected by it, or seen its effect on others, and have been itching for years for repeal. But they couldn’t do it on their own. They needed the help and the support and the votes of the middle ground, soft Yes constituency – the parents and grandparents of the repealers, the men, the unsure – who were in favour of change, but had not a clear idea yet of the change they wanted. And the repealers needed to do politics to achieve that. Some of them learned that lesson reluctantly. But the story of the Yes campaign is politics as the art of the possible.

Mostly, those soft Yes and middle-ground voters came home to the Yes campaign because, ultimately, they wanted to. They had doubts, sure, but the Yes campaign made a welcome home for them. Grounded in the campaign’s own research, other published research and also of the experience of many of its leaders in the marriage equality campaign, this was the key insight of the Yes strategists when deciding on the message, tone, shape and mood of their campaign: to appeal to the middle ground, they needed to talk not so much about women’s rights, or human rights, or the right to choose, or bodily autonomy, or reproductive rights, or any of that – but to emphasise the hard cases or rape and fatal foetal abnormality and the lived experiences of women’s lives.

That’s what gave you the Yes campaign slogan of the three Cs: care, compassion and change. Notice what’s missing? Choice.

Of course, some campaigners talked about the rights-based arguments and choice. They put up their posters, despite the concerns of their allies that they were hindering, not helping: but it wasn’t the central narrative, and it certainly wasn’t what the main Together for Yes campaign sought to stress to the target voters it had identified as decisive. So the dominant messages continued to be “compassion and care”, not “our bodies, our rights”. Needless to say, this annoys some repealers.

Like all campaigns, there is a hidden history of the Yes campaign. This one features behind-the-scenes battles over messages and tone, people asked to step back from public appearances and doubts over strategy and content. It features worries over money, being slow out of the blocks and a crisis of confidence about three weeks ago, which ended with resolve to continue with the agreed strategy and heave towards the middle ground. All that is not just normal in any campaign, it is probably essential.

Parallel to this – and largely unruffled by it, one way or another – was a massive ground campaign that increased in scope and intensity as the campaign proceeded. Their opponents started in a more lively fashion, but the repealers overwhelmed them by the end.

Contrasting with the Yes campaign’s determined focus on the middle ground voters who would prove decisive, the No campaign spoke primarily to its base.

Looking back at the coverage from the 1983 referendum, one is struck by the extent to which the debates were dominated by the interests of the unborn, rather than women. That has changed in the past 35 years because the position of women has changed. The debates this time were about women. The No campaign never really came to terms with that. In a way, it was talking a different language to the majority of modern Ireland.

By the final week, the writing was on the wall. The No side could smell defeat, and it showed

If soft Yes voters were always the key, the No campaign completely failed to speak to them in a way that would dislodge them. Images of dead foetuses are only going to turn those voters away. The smarter parts of the No campaign could see this, but they were powerless to stop it.

The same could be said of many of the politicians that stepped up for the No side. Mattie McGrath, Rónán Mullen, Danny Healy-Rae – these are not the people to speak to liberal, urban, swing-voter Ireland.

By the final week, the writing was on the wall. The No side could smell defeat, and it showed. An attempted late pivot, mooting the possibility of a different amendment or legislation to allow abortion for the “hard cases”, fell flat – mostly because the No campaigners did not really believe it themselves. Everyone knew they would also oppose abortion in limited circumstances as well. A message is usually unconvincing if the side offering it obviously does not believe it itself.

In the end, the margin was enormous. The Irish Times poll 10 days out – carried out by the same pollsters whose exit poll accurately predicted the final result – put the state of the race at 44 per cent for Yes, 32 per cent for No and 24 per cent undecided or undeclared. In the final phase of the campaign the entire undecided vote broke for Yes. That is unprecedented in the history of referendums. The middle ground did not shuffle hesitantly to the Yes side, nurturing doubts – it quietly made up its mind, and then it stampeded there.