Most terminations - 6,542 - were carried out on early pregancies, less than 12 weeks 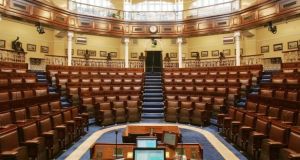 The Health (Regulation of Termination of Pregnancy) Act 2018 became law in December 2018.

No woman seeking an abortion sought a review of the medical opinion on her application in the first year of new legislation legalising terminations of pregnancy, according to the Health Service Executive.

A total of 6,666 abortions were carried out last year under new legislation legalising terminations of pregnancy, a report by the Minister for Health on abortion notifications in 2019 shows.

Under the legislation, the report was to be prepared by June 30th and laid before the Oireachtas, as was a separate report by the HSE on reviews.

Neither the Department of Health nor the HSE was able yesterday to provide a copy of the report on reviews, but a HSE spokeswoman said last night there had been no reviews during the first year of the legislation.

The vast majority of abortions – 6,542 - were carried out on early pregancies, less than 12 weeks, according to the notification report.

No breakdown was provided as to whether terminations were performed in hospitals, or in the community.

One hundred abortions were performed because there was a condition likely to lead to the death of the foetus; most fatal foetal anomalies would be included in this category.

Dublin accounted for 2,493 terminations by the woman’s home address and Cork for 606, the figures show. Terminations were carried out in all 26 counties of the Republic, with Leitrim recording the lowest figures at 27.

Some 67 terminations were carried out on women giving an address in Northern Ireland.

January 2019, the first month after the Health (Regulation of Termination of Pregnancy) Act 2018 came into force, saw the highest number of abortions carried out, at 625. Thereafter, there were only slight variations in the monthly figures.

The Irish Family Planning Association welcomed the “landmark” publication of the figures, noting that 98 per cent of terminations had occurred in early pregnancy.

Ireland was moving in the right direction in the provision of reproductive services but there was more to do, chief executive Niall Behan said.

“The new government must prioritise reforms to contraception access and sexuality education and ensure that the 2021 review of the abortion law focuses on enhancing access to abortion care so that no one is left behind,” he said.

The Pro Life Campaign, adding the UK and Irish figures, said this was the first time in 18 years that there had been an increase in the number of abortions “and the first time in our history that thousands of innocent unborn babies have had their lives ended with the full backing of Irish law”.

“The public has had to endure years of cleverly choreographed campaigning for abortion led by some of our most senior politicians,” said spokeswoman Maeve O’Hanlon. “Today we see the terrifying results of what they were pushing. Today, the reality has caught up with the lie that repeal would make Ireland a kinder, more gentle and compassionate country.

“The State sponsored choreography of abortion needs to end immediately and give way to an open and honest debate, where the voices of those who regret their abortions and others are afforded the opportunity and space to be heard.”

Aontú leader Peadar Tóibín maintained the figures showed a “massive spike” in abortions carried out, adding that “98.2 per cent of abortions that took place happened where there was no threat to the health or the life of mother or child notified”.

Pointing to wide variations in the figures for different counties, Amnesty International said the new Government must ensure abortion services are available and accessible to all pregnant people in the state.

“Some serious gaps remain in the legislation that are likely still forcing pregnant people to travel. One gap we previously highlighted is the high threshold of “serious harm” to a pregnant person’s health under what should be a general health ground. Another is the lack of access in cases of severe non-fatal foetal impairment diagnoses.” said executive director Colm O’Gorman.