The Pro Life Campaign’s definition of love is cruel

Diarmaid Ferriter: It is a strange kind of love that denies a teenage rape victim an abortion 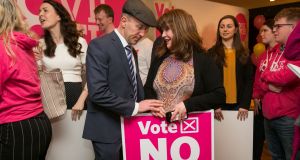 Michael Healy-Rae and Caroline Simons during the launch of the ‘Love Both’ campaign in Dublin this week. Photograph: Gareth Chaney/Collins

Speaking at the unveiling of the Pro Life Campaign’s “Love Both” campaign during the week, spokeswoman Caroline Simons said: “Voters who support abortion in limited circumstances need to know that what they hope for with repeal and what they get are two entirely different things.”

What astounding arrogance. Simons has decided that those who will vote for the removal of the amendment have no independence of mind and are naive, delusional dupes who will vote next month unaware of the reality of what they are doing and devoid of a capacity for love. She has also decided what they hope for.

Doctors, it would seem, are also to be rendered incapable of autonomous thought if the amendment is removed, as according to Cora Sherlock they, “who are trained to protect life, will suddenly be expected to facilitate the taking of life”. Should the amendment be removed, we will live in totalitarian times and no doubt about it.

But at least the Pro Life Campaign is pro-love, so much so that it wants to retain and spread the love. Is this the “love” that resulted in a 14-year-old, suicidal rape victim in 1992 being prevented from leaving the county for an abortion. A a girl, in words conveyed in court, who said, “It is hard to go through the nine months. It is better to end it now than in nine months time?”

Is this the love felt in 2007 by a 17-year-old woman carrying a foetus with anencephaly who sought assistance from the Irish courts for a termination and was spat at and jeered entering and leaving the court?

Is this the “love” Savita Halappanavar felt in 2012 when she presented with back pain in University Hospital Galway, was found to be miscarrying, and died of septicaemia a week later? Her husband, Praveen, says she asked several times over a three-day period that the pregnancy be terminated.

Having been told she was miscarrying, and after one day in severe pain, Savita asked for a medical termination. This was refused because the foetal heartbeat was still present and they were told, “this is a Catholic country”. She spent another 2½ days “in agony” until the foetal heartbeat stopped.

According to her husband, the doctor “told us the cervix was fully dilated, amniotic fluid was leaking and unfortunately the baby wouldn’t survive”. The doctor, he says, said it should be over in a few hours. There followed three days, he says, of the foetal heartbeat being checked several times a day.

“Savita was really in agony. She was very upset, but she accepted she was losing the baby. When the consultant came on the ward rounds on Monday morning Savita asked if they could not save the baby could they induce to end the pregnancy. The consultant said, “As long as there is a foetal heartbeat we can’t do anything.”

Again, on Tuesday morning, as revealed in the testimony of Praveen, the same ward rounds and the same discussion. The consultant said it was the law, that this is a Catholic country. Savita [a Hindu] said “I am neither Irish nor Catholic” but they said there was nothing they could do.

Is that what the Pro-Life Campaign considers tough love?

And what about the love felt by a girl deemed to be at risk of suicide who wanted an abortion and was sectioned under the Mental Health Act because her treating psychiatrist said terminating the pregnancy “was not the solution”.

In this case, an order was made to detain the girl on the evidence of a psychiatrist who said that while the child was at risk of self-harm and suicide as a result of the pregnancy, “this could be managed by treatment and that termination of pregnancy was not the solution for all the child’s problems at this stage”.

Or what about the love felt by this woman who gave testimony to the Abortion Rights Campaign; with an unwanted pregnancy, she jumped into the Liffey: “I had ruined my life, no one wanted me. I didn’t want to be pregnant … poor and dependent on social welfare. My parents were angry with me for ruining my life, my boyfriend was angry with me and I was utterly disappointed in myself.”

In the Liffey water, she was “frozen by the cold and slightly shocked that there was a strong current dragging me downstream”.

She was rescued by a passerby and she found “someone, who knew someone who had had an abortion in Liverpool. I managed to get a number and book a flight… The shame, silence, isolation I have felt by my home country is shocking… I did not want single-mother handouts like the ‘love them both’ parade harp on about. I didn’t want to be pregnant, end of.”

The Pro Life Campaign’s definition of love is cruelly simplistic; what they claim and what many women have experienced with crisis pregnancies are two entirely different things.