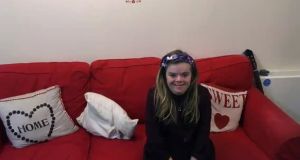 Both the DUP in its motion and Sinn Féin in its amendment to new abortion legislation for Northern Ireland cite the work of Heidi Crowter (above), who has Down syndrome, and who has been campaigning for a change in the British law which allows for abortion up to full term in cases of Down syndrome. File photograph: Guardian

Sinn Féin has indicated a willingness to see some alteration of the new abortion legislation for Northern Ireland that was enacted at Westminster and came into effect at the end of March.

The party has tabled an amendment to a DUP motion on abortion, some of which relates to Down syndrome, that is to be debated in the Northern Assembly on Tuesday.

The DUP motion “welcomes the important intervention of disability campaigner Heidi Crowter and rejects the imposition of abortion legislation which extends to all non-fatal disabilities, including Down syndrome”.

Sinn Féin in its amendment alters the DUP motion so that it would read that the Assembly “welcomes the important intervention of disability campaigner Heidi Crowter and rejects the specific legislative provision in the abortion legislation which goes beyond fatal foetal abnormalities to include non-fatal disabilities, including Down syndrome”.

If the Sinn Féin amendment succeeds it would apply to the element of the legislation which has been interpreted by many as meaning unborn babies with conditions such as Down syndrome, cleft palate or club foot can be aborted up to full term.

Under the new legislation that came into effect on March 31st, abortion is available in Northern Ireland without restriction until the 12th week of pregnancy.

A limit of 24 weeks applies in situations where continuing the pregnancy would involve risk of injury to the woman’s physical or mental health.

There is no time limit in cases of fatal foetal abnormality or in cases where, if born, the baby would suffer a severe mental or physical impairment.

In the Republic abortions are allowed in cases of fatal foetal abnormality, but this does not apply for conditions such as Down syndrome.

The DUP motion, which is in the name of Assembly members Paul Givan, Joanne Bunting, Michelle McIlveen and Pam Cameron, seeks to reject the legislation passed at Westminster and to allow the Assembly to create its own legislation and more specifically to ensure there can be no abortions up to full term on the basis of disability.

Both the DUP in its motion and Sinn Féin in its amendment cite the work of Heidi Crowter, who has Down syndrome, and who has been campaigning for a change in the British law which allows for abortion up to full term in cases of Down syndrome.

Mr Givan, a Lagan Valley MLA, indicated that the DUP would press for full rejection of the Westminster legislation and said the Sinn Féin amendment “is a recognition of the flawed legislation that Westminster is imposing on the people of Northern Ireland”.

“Our motion recognises the flawed approach taken by the UK government in imposing this legislation, which is a devolved issue for Stormont, ” he added.

The Alliance for Choice group, in condemning the Sinn Féin amendment, said it would “mean people would have to continue to travel for terminations for foetal anomaly diagnoses as they still have to in the 26 counties”.