Repeal of the Eighth ‘will constitute consent’ for liberal abortion regime 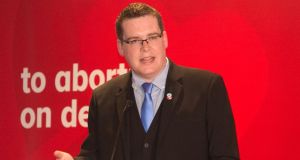 Repealing the Eighth Amendment to the Constitution will constitute consent for Ireland to have a “liberal abortion regime”, the Save the 8th campaign has said.

Speaking on The Irish Times’s Inside Politics podcast, the campaign’s communications director, John McGuirk, said many people were unaware of the implications of a vote for repeal. Most voters believed they were supporting legislation allowing for abortions in cases of rape, incest and fatal foetal abnormalities, not terminations of “healthy babies of healthy mothers up to 12 weeks and beyond”, he claimed.

The Government has committed to legislating for access to terminations in the first three months of pregnancy. Abortions would otherwise be permissible only when a mother’s life or health were at risk, or in cases of fatal foetal abnormality.

Save the 8th claims this is similar to the regime in Britain, where terminations are allowed in the first 24 weeks of pregnancy with the approval of two doctors and beyond that if the mother’s life is at risk or the child would be born with a severe disability, among other reasons.

Asked if his campaign believed there were any circumstances that justified abortion, Mr McGuirk said he had no problems with the Protection of Life During Pregnancy Act, which allows for abortions when a mother’s life is at risk, including by suicide. He added that it is “early days yet” but he is “okay with the law as it currently stands”.

Members of the anti-abortion campaign had opposed the introduction of the Act in 2013 because of the suicide provision. Seventy seven abortions have been carried out since the law’s inception, including seven on the grounds of suicide.

Save the 8th was questioned about the use of graphic images by anti-abortion organisations. Mr McGuirk said photographs of dismembered foetuses have been used by one particular organisation. “It is appalling, and I think they should stop doing it. They are not Irish; they have no connection with the Irish debate. They have come in from outside, the UK and the USA.

“They are not helping the cause they think they are helping. There is not a single person in any of the major campaigns that wouldn’t wish that they would stop doing what they’re doing and go back to their own country.”

The campaign has hired the UK-based data-analytics and political-campaigning company Kanto, which was used in the Brexit campaign to advocate a No vote. Mr McGuirk claimed it is using the group for internal matters and defining what works for its campaign, insisting it is not being used for “microtargeting” of voters.

Mr McGuirk said Save the 8th had raised €460,000, mostly from elderly donors who have given to anti-abortion causes for year. The average donation, he said, was between €80 and €90 and generally arrived by post.

Mr McGuirk claimed the Together for Yes campaign’s fundraising launch last week, which raised €500,000 in a number of days, was a reaction to panic in the group. There was no way to verify who and where the money has come from , and a significant majority of donations would be found to be breach the law, he said.

Mr McGuirk was also asked about his online presence, including his provocative use of Twitter. He said relentless vitriol had been directed at anti-abortion campaigners and his actions boosted their morale, as they liked to see him fighting back.

“I am not an angel,” he said. “I do like to tweak the tail of my opponents. It is probably something I should do less of . . . The last thing I want [is for] the referendum campaign to be about me or anyone else.”

NOTE: An earlier version of this story reported that “an average of 77 abortions a year have been carried out since the law’s inception, including seven on the grounds of suicide”. This was incorrect , and the error was introduced during editing.