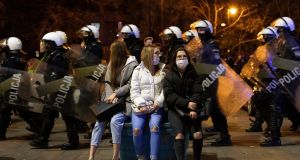 Women wearing face masks watch as police march past them, in Warsaw, Poland, amid protests at the weekend. Poland’s right-wing government has delayed implementation of a court ruling that would impose a near-total ban on abortions after two weeks of the largest protests the country has experienced since the 1989 collapse of communism. File photograph: Maciek Nabrdalik/New York Times

Poland’s ruling party has held off on publishing a controversial court ruling that bans abortion in almost all cases, appealing for calm amid a fresh wave of protests.

Support for the national conservative Law and Justice (PiS) party has slumped nearly 10 points after two weeks of demonstrations across the country, the largest in decades, including a gathering of more than half a million people last Friday.

Demonstrators oppose a constitutional court ruling from October 22nd, which cannot be appealed, outlawing abortions in the case of foetal abnormalities. The only remaining circumstances for a Polish woman to end a pregnancy legally are in cases of rape, incest or health risk.

PiS leader Jaroslaw Kaczynski has welcomed the ruling by the court, which is controlled by political loyalists. In a heated address, he dismissed protesters as “nihilists” engaged in a campaign to destroy Polish culture and its still-dominant Catholic Church.

Behind the scenes, however, his party and coalition partners are alarmed by protests which, rather than losing momentum, have grown and broadened beyond the issue of abortion to a general vote of no-confidence in the government.

This week PiS was expected to publish the ruling in an official gazette, making it law, but a government spokesman has instead called for dialogue and calm, and an end to street protests.

“According to regulations, the ruling of the constitutional tribunal should be published in a timely manner,” said government spokesman Piotr Muller when questioned about the publication delay. “At the moment, however, we all need peace and discussion around this judgment, a quietening down of the public mood as well as discussions among experts.”

‘Pouring oil on the fire’

Women’s groups have dismissed attempts to seek a compromise by President Andrzej Duda, a Kaczynski ally, accusing him of “pouring oil on the fire”.

The ruling party postponed Wednesday’s scheduled sitting of the Sejm lower house of parliament, prompting speculation among opposition parties that PiS fears defectors in a vote on the abortion amendment Bill.

“They don’t have any ideas how to resolve the situation in Poland, they do not have a majority in parliament, they are afraid to answer questions,” said Malgorzata Kidawa-Blonska, a leading opposition figure and deputy Sejm speaker.

PiS officials insist the delay was nothing to do with the abortion Bill stand-off and was motivated instead by Covid-19 safety concerns.

Opinion polls suggest PiS, already struggling to recover from a recent coalition crisis, has been rattled by the abortion protests, with support down to 31 per cent. Last year it won a second term with 45 per cent of the vote.

A poll for the Rzeczpospolita newspaper suggested nearly 70 per cent of Poles hold a negative view of Mr Kaczynski after his recent remarks attacking demonstrators. More than 70 per cent agreed that the 71-year-old politician, co-founder of PiS and, until now, an unquestioned authority figure in his party, should step aside.

“We can see tumbling support in several polls but the ruling party seems to believe it can wait it out,” said Jaroslaw Flis, a Krakow-based sociologist, on the TVN24 news channel.