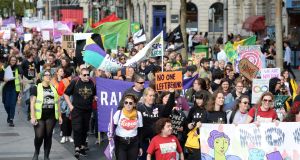 A March for Choice in Dublin, organised by the Abortion Rights Campaign in September. Official figures of women using Ireland’s new abortion service will not be published until well into next year. Photograph: Dara Mac Donaill

One year after its introduction, the number of women using Ireland’s new abortion service remains a closely-guarded secret.

Official figures will not be published until well into next year, but the estimates from those involved in providing the service have been reduced from an initial 10,000 a year to about 5,000. The vast majority are being performed by GPs prescribing pills in the community.

Whatever about the numbers, the verdict of doctors who signed up to deliver the service is overwhelmingly positive, despite a few areas of failure and clear signs of future challenges.

“It has been surprisingly trouble-free. We thought we might be overwhelmed but that hasn’t happened,” said Prof Fergal Malone, master of the Rotunda Hospital. “Most women have been making their minds up before nine weeks, so GPs have done the heavy lifting by providing medical terminations in the community.”

“Better than expected but not as good as we had hoped,” is how Niall Behan, chief executive of the Irish Family Planning Association, summed up the year. “This time last year there was huge uncertainty but now we’re in a very different place.”

The patchy provision of service, one year after it started, remains an issue. While the HSE said “a good geographic spread” of GPs have signed up, these 347 doctors represent no more than 15 per cent of GPs. Black spots remain: there are still no doctors in Co Sligo providing terminations, for example.

It remains the case that just 10 out of 19 maternity units are providing full abortion care. “There are lots of gaps in service, particularly in the northwest. We had hoped the service would be seamless and that more hospitals would have come on board. Against that, a real community of providers has been created, and that’s a real positive,” said Mr Behan.

The shortfall in physical provision has been largely offset by the My Options helpline, which has performed efficiently in creating a care pathway for women seeking terminations leading to the nearest available service. Up to the end of November, the helpline had received 12,080 calls, with the number declining through the year to settle at an average of about 1,000 a months at present.

Consultant obstetrician at Cork University Maternity Hospital Dr Keelin O’Donoghue enumerated many positives of the new service – and even more “not so positives”.

“This has been a positive change in the healthcare we provide for women in Ireland. This is positive for doctors like me who advocated for this change and who have been working in Irish maternity hospitals for many years.

“Women are being well looked after from what we hear and see though we need some formal studies on this.”

The number of hospitals performing terminations has not changed since the service was introduced, she pointed out, adding that funding for posts is often slow to be released and used.

“The new service has meant an uplift in workload with no increase in staffing, in overstretched hospitals and busy wards. This means women experiencing all types of pregnancy complications as well as those undergoing terminations being managed side by side.”

Dr O’Donoghue said staff in some hospitals can feel isolated and undermined, and working relationships between specialists have become difficult in some units. This is creating conflict “in what is an already stressed work environment”.

The reasons for the slow rollout of hospital services were outlined in a meeting of a HSE’s safety and quality board meeting in September.

Anne O’Connor, the HSE’s chief operations officer, outlined “a number of challenges that are impacting implementation of the service in full such as: issue of conscientious objection, recruitment of staff and also there are infrastructural and logistical challenges that hinder the provision of the service in a sensitive and appropriate manner such as the limited number of single rooms”.

There has also been “difficulty in setting up dedicated clinics when the demand for the service is low, particularly in smaller units, and access to theatre slots in an already busy maternity unit”.

Labour Senator Ivana Bacik said that, other than the gaps that have emerged, the rollout of the service has proven successful. She pointed towards an increasing number of GPs that have signed up.

For Ms Bacik, there are two major political issues outstanding. The first is in relation to legislation which Minister for Health Simon Harris promised to provide for exclusion zones outside abortion care centres.

This was prompted by controversy over picketing of some hospitals and GP surgeries by anti-abortion activists after the law changed. These protests are continuing intermittently.

The second issue on Ms Bacik’s agenda is around the three-day waiting period before a woman can access abortion medication.

“There is no medical reason for this provision. A number of us want to see this removed, and when the legislation comes up for review we will push for this,” she says.

At the Rotunda one of the main challenges, according to Prof Malone, has arisen where pill-induced abortions failed to complete and the women requires scans and follow-up treatment in hospital.

The hospital has scheduled twice weekly evening clinics each week to handle the bulk of women seeking terminations between nine and 12 weeks, with terminations generally taking place at weekends when regular gynaecological services are quieter.

Prof Malone estimated the Rotunda has seen 80-100 women seeking termination due to fatal foetal abnormality, and “one or two cases a week” relating to maternal illness. There have been just two cases where a woman sought a later abortion for mental health reasons, he estimates.

“The floodgates did not open,” he said.

In contrast, Dr O’Donoghue said there have been a “large number” of fatal foetal abnormality cases involving a “significant workload” to provide care before, during and after the termination.