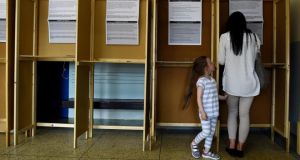 Abortion referendum: 70 per cent of women voted in favour of repeal, compared with 65 per cent of men. Photograph: Clodagh Kilcoyne/Reuters

This exit poll provides the first understanding of how Ireland has voted in the referendum on the Eighth Amendment. It finds that 68 per cent have voted in favour of repeal, with 32 per cent voting against.

The exit poll was conducted yesterday among 4,501 voters as they left the polling stations. Voters were randomly selected at 160 stations across the country from Achill Island off Co Mayo to Dublin city centre, and from the northern tip of Donegal to southwest Cork.

Those selected were asked to complete a mock ballot paper replicating how they had just voted. They also provided their gender and age, so that the exit poll can provide not only an indication of the overall result, but also allows us to understand the differences in voting patterns across different population groups.

Within each age group the majority of both men and women have voted in favour of repeal. As was anticipated, women aged 25 and under showed the highest levels of support – 90 per cent voted in favour.

The consensus throughout polling day was that the turnout was relatively high. While an exit poll cannot measure turnout, it does provide an understanding of the profile of voters.

Voting behaviour is typically habitual. Those who have voted in the past will most likely vote again in the future. There is little empirical evidence – in Ireland or internationally – that previous elections or referendums have been swung by an upsurge in votes from a group that traditionally do not go to the polls.

Those suggesting that the outcome of this referendum rests solely on the engagement of younger voters should be mindful that there were as many votes cast yesterday in favour of repeal by those aged 65 and older than by those aged 25 and under. These results are a clear indication of a resounding vote in favour of repeal. However, how reliable are exit polls? Can this poll accurately anticipate the result before a single vote is counted?

Firstly, it is important to recognise that exit polls are entirely different from pre-election polling in that they record actual voting behaviour as opposed to asking about voting intention.

This eliminates the uncertainty that exists with pre-election polls. There are no undecided voters. There is no need to distinguish between likely voters and those who do not vote despite telling the pollster that they will.

However, that is not to suggest that exit polls are themselves without challenges. Quite the opposite, they involve incredibly complex design. Accurate polling is built upon the foundation of a sample that represents all voters. Establishing these foundations involves a recipe with very precise measurements.

There is a long list of ingredients: The number of voters registered at each polling station; the proportion of these that will vote; the pattern of voting trends across the day; the ever-changing voter profile as the day progresses.

Very limited information exists on which to make decisions on study design. The overall turnout figure for each constituency is published, however, there is only limited reliable information on how this differs across different polling stations.

Similarly, it is not really known how voter numbers and profiles differ across the day. How many people vote early in the morning and in what ways are they different from those who vote at teatime?

Exit polls need to be conducted within a very short period of time – voting happens over a 15-hour period. They also need to be published as quickly as possible after polls close – in this case within moments of the polls closing. This is not easy when there is typically a spike in voting during the few short hours before polls close.

In spite of these challenges exit polls are highly predictive of the result.

The exit poll conducted by Ipsos MRBI on behalf of The Irish Times for the 2016 general election accurately reflected the actual vote share obtained by each political party.

With all this in mind we can be highly confident that Ireland has voted to repeal the Eighth Amendment.

While this outcome may have felt inevitable in recent days, the magnitude of the vote in favour of repeal – and the high levels of support across different groups of voters – will come as some surprise to those on both sides of this campaign.

Kieran O’Leary is a director of Ipsos MRBI