‘Whole families are affected from Belfast down to Kerry. There is no help’ 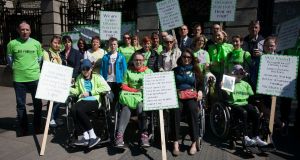 Up to 200 people affected by Lyme Disease held a rally outside Dáil Éireann on Wednesday to highlight the condition, as well as what they contend is its lack of recognition by health and political authorities.

The rally was organised by Tick Talk Ireland, which is the support group for those with Lyme Disease. Its formal name is Borreliosis, and it is a bacterial disease transmitted by the bite of ticks.

If not diagnosed, the groups says, it can lead to very serious conditions, including serious neurological changes. In earlier stages, symptoms include joint pain, swollen glans and severe fatigue.

Ann Maher, the organiser of the rally, said that more than 1,700 people are in the support group, but the disease is not recognised by the authorities in Ireland. She said many of those have no choice but to get diagnosed abroad.

She said she contracted the disease in 1995 and was diagnosed in Switzerland in 2002. She said she has suffered Kidney failure, pneumonia and Bell’s palsy (facial paralysis).“Whole families are affected from Belfast down to Kerry. There is no help. They are not recognised.”

Edwin Simms from Co Wicklow is one of three people in his family affected by Lyme Disease. He was bitten by a tick in Co Kerry, his son on the Aran Islands and his daughter in Co Wicklow.

He said that the family health insurance did not cover the condition in Ireland and they were forced to go to Germany for diagnosis and treatment, which cost thousands of euro.

Aisling Mugan from Co Roscommon was bitten by a tick when walking in the Alps in 2009. She said that, after numerous wrong diagnoses, Lyme Disease was confirmed by a a German clinic in 2016. She said that pain was her primary symptom but she also experienced neurological effects such as “brain fog” and the inability to walk straight. She also had to give up her job as an English teacher.

“Lyme disease needs to be recognised as a disease in Ireland. It is constantly being disregarded by doctors and TDs and not covered by any medical care,” she said.