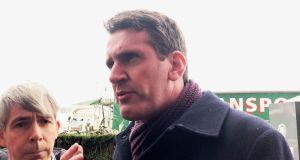 A Dublin northside crime task force must be established like the Mulvey commission in the north inner city after a spate of murders in the area, according to Labour Senator Aodhán Ó Ríordáin.

Calling for a Mulvey-style task force, which would involve all community stakeholders, he said it was needed to deal with the intensifying violence in the area where children passing crime and murder scenes on the way to school are “beginning to think this is normal”.

Former Labour Relations Commission chairman Kieran Mulvey was asked to compile a report on regenerating on the northeast inner city in 2016, following a spate of gangland killings in the Hutch-Kinahan feud. Extra gardaí, CCTV cameras and staff in youth work, eldercare and childcare in the north inner city were among measures implemented after suggestions by the commission.

“That gap starts at age three. Don’t be surprised that in 14 years time they’re involved in this type of criminal activity.”

Speaking at the Northern crossroads at Clare Hall, where a Garda station is to be built the Dublin Bay North candidate said that “to have a situation where a 17-year-old’s dismembered body is dumped in a bag on the north side of the city has us at a crossroads” on crime.

The finding of remains of Keane Mulready-Woods follows six murders in the last seven months in this area of the city, he said.

He added that he has been calling for a crime taskforce for the northside for the past year and he could not understand the reluctance of the Government to do so, when they set up the Mulvey commission four years ago, which he paid tribute to.

Minister for Justice Charlie Flanagan acknowledged that there should be more than a criminal justice response, but he said on the RTÉ Seán O’Rourke show that “if you have a Mulvey commission in every community then you dilute what’s involved”.

Mr Ó Ríordáin asked “then why did they set it up in the north inner city”. That was a reaction to a particular set of circumstances and number of murders and “we’re talking about a spate of murders” on the northside.

Labour Dublin North-West candidate Andrew Montague pointed to the success of the Ballymun initiative Thrive where, with An Garda, the Prison Service, the Probation Service and local community services they had “targeted the 20 most prolific offenders in our area” and reduced offending significantly.

Mr Montague said this should be spread across the city and its co-ordination was such in Ballymun that if a feud was ongoing, people due for temporary release from prison are not released into the situation.

Mr Ó Ríordáin also hit out at the criminalisation of drugs addiction and said that 70 per cent of drugs cases are for possession for personal use which he described as a “huge waste of Garda time, and resources”, which “should be spent on gangs and criminality”.

He added that “the war on drugs has failed absolutely” and said communities “have been sidelined from Dublin drugs task forces and that is why nine former drugs ministers signed a statement criticising Government for isolating community voices and centralising all decision making”.

1 Two men found dead in Dublin city centre
2 Publican blames Covid-19 as Dublin’s Dice Bar to shut for good
3 Ireland could lose out as France lays claim to most of €5bn Brexit compensation fund
4 Miriam Lord: Dramatic Al sets the stage for a dark day of reckoning
5 Metro South may be back on table as transport plans for Dublin are reviewed
Real news has value SUBSCRIBE