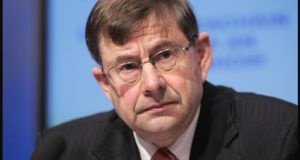 Fianna Fáil TD Éamon Ó Cuív wants to reopen Micheál Martin’s decision not to stand a presidential candidate against President Michael D Higgins at a special meeting of TDs and senators next month, his supporters say.

Mr Ó Cuív, a Galway West TD, has so far refused to comment on calls from some Fianna Fáil members for him to stand as the party candidate against Mr Higgins.

However, one of his local councillors in Galway, Ollie Crowe, says he has spoken to Mr Ó Cuív on a number of occasions on the issue.

Mr Crowe says the former minister wants the prospect of Fianna Fáil standing a presidential candidate to be discussed at the annual parliamentary party think-in, which takes place before the return of the Dáil and Seanad after the summer recess.

The think-in is at the Grand Hotel, Malahide in north Dublin, on September 11th and 12th.

We should clear the air. If there is dissent, then that is the place to have it, out on the floor, not in the press

The call has been backed by two members of Mr Martin’s parliamentary party, Carlow Kilkenny TDs John McGuinness and Bobby Aylward. Mr Martin has already secured the backing of his TDs and senators to support Mr Higgins for a second term, but Mr McGuinness and Mr Aylward say another debate should be held.

“Okay, we made a decision but we may have been premature making a decision,” Mr Aylward said. “We should clear the air. If there is dissent, then that is the place to have it, out on the floor, not in the press. I think it should be a topic for discussion if there is someone in the parliamentary party who is interested in it.”

Mr McGuinness said Mr Martin made the announcement on supporting Mr Higgins’s nomination at the end of a parliamentary party meeting earlier this summer.

“It wasn’t a case that we had discussed it, we hadn’t,” he said. “I’d like to see it discussed in Malahide.”

In order to get on the ballot paper in a presidential election, a candidate needs the backing of four county councils or the signatures of 20 members of the Dáil or Seanad.

However, the council is unlikely to decide who to support, if it supports anyone, until next month.

Initially, Mr Crowe said Mr Ó Cuív would be willing to get a nomination through the county council route, but would now prefer to get the support of the parliamentary party. This is unlikely to happen, since Mr Martin and senior frontbench TDs have already ruled it out.

However, it will still cause political difficulties for Mr Martin if Mr Ó Cuív attempts to have it discussed at the gathering in Malahide.

“The decision that was taken in Leinster House was flawed because there were only 16 members in the room,” Mr Crowe said. “Éamon said he felt that if there was willingness on behalf of the Oireachtas members, it could be a discussion issue in Malahide.

“Éamon said to me that he has good support within the parliamentary party, but he was hoping that support would increase when people are back from holidays and back from vacation.

“I genuinely believe there is a majority of parliamentary party members who want to run a candidate.

“Éamon would prefer to go through the PP [parliamentary party] route, on the basis that he wants to run as a Fianna Fáil candidate. You might be alienating the parliamentary party if you go the local authority route.”