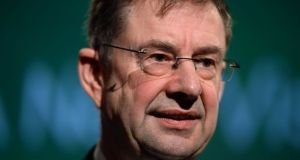 Éamon Ó Cuív: “The options have been artificially narrowed.”

Fianna Fáil TD for Galway West Éamon Ó Cuív has said there is serious disquiet in the party about entering into a four to five year government arrangement with Fine Gael.

“The options have been artificially narrowed, to present us with this choice only of government,” he told RTÉ radio’s Morning Ireland.

“We need to treat people as equals in this process,” he said. A number of groups and parties have been excluded “including the joint biggest party in the Dáil.”

Mr Ó Cuív said there was a need for consultation with “a much broader section of the Dáil”. He suggested that a strong majority is needed in the short term, a national government is one option to get a consensus to deal for the period of the coronavirus health and economic crisis.

There seems to be an assumption in media reporting over the last few days that FF members will automatically endorse an agreement arrived at by leadership of FG and FF. From what I hear speaking to FF local reps & members across the country,this could be way off the mark.

Earlier, Catherine Murphy, one of the co-leaders of the Social Democrats said any new government had to be one that takes the “right” decisions for the next five years.

Any partners in a coalition must be compatible and government formation was now very important because such a government would still be in place in 2024, she added.

The Social Democrats would look at the framework document, she said, but pointed out that there are a lot of things that are unknown at this point, including the approach of the European Union.

Ms Murphy described as “strange” and “tone deaf” the decision by Revenue to allow non-residents to avoid paying tax if they remain in the country for more than 183 days due to Covid-19 restrictions.

Relaxing the system, which allows people to be out of the country for six months a year, seemed like “the strangest of decisions,” she said.