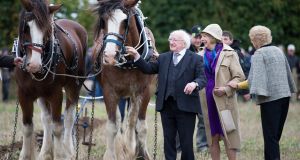 Presidential candidates have descended on the opening of the National Ploughing Championships in Co Offaly, which more than 300,000 people are expected to attend over its three day run.

Four of the five confirmed candidates visited the site in Screggan on Tuesday including incumbent Michael D Higgins, who officially opened the event.

Mr Higgins and challenger Seán Gallagher met for the first time since the campaign began, with the two shaking hands at one point. Mr Gallagher said Mr Higgins had thanked him for “a kind note” he recently sent him.

Mr Higgins said he had “never run away” from a campaign in his life and that he had “answered questions for about 30 or 40 years in relation to campaigns”.

“I’m looking forward to it,” he said of the election campaign.

Asked if he would take part in televised debates with his opponents, Mr Higgins said his campaign team would hold discussions on the issue soon.

“Let the campaign be about real issues and let it be dignified,” he added.

He said there is a responsibility never to abandon these families “to the cruelty of market forces”. Mr Higgins said his wish for rural Ireland in the year ahead was that it would be a time without a death in a farming accident.

Mr Gallagher, whose support was put at 15 per cent in a weekend poll to Mr Higgins’ 67 per cent, said he received a great reception from the public at the ploughing, which he called a “celebration of the very best of Ireland”.

He said people were telling him it was time for something new and fresh and that he was not seeking to be Mr Higgins’ replacement but rather a successor.

The former Dragons’ Den panellist said Mr Higgins was an “inspiration to me and many people around the country”.

Asked why he is running if he believes Mr Higgins is such a capable leader, Mr Gallagher responded: “It’s about laying out the vision for the next seven years. I think our future is about being forward focused and forward looking.”

He said he intends to run a positive campaign but reaffirmed his position that he is against any debates which Mr Higgins does not take part in.

Gavin Duffy, a businessman and Dragons’ Den panellist, who was at 6 per cent in the Sunday Business Post poll, also said he was against taking part in debates without Mr Higgins.

“It’s not a debate without the incumbent.”

He said all the candidates have questions to answer, including Mr Higgins on the issue of presidential expenses.

Asked about promises made by other candidates to take a reduced presidential salary or no salary at all, Mr Duffy said the role should not be only for well off people who can afford to do it for free.

He said the majority of people approaching him at the event promised him their vote. “It’s taken more than an hour to come more than 200m.”

Mr Duffy accepted he faces an uphill struggle but said “we’re ready to meet that challenge”.

Senator Joan Freeman, who was at 3 per cent in the poll, said she has been a regular at previous National Ploughing Championships in her role as founder of suicide prevention charity Pieta House.

Asked about her low standing in the poll, Ms Freeman said “it’s early days” and noted that Mary Robinson was at one per cent at one stage during the campaign she eventually won in 1990.

She said Mr Higgins should take part in the debates as it was “seven years since people have heard him”.