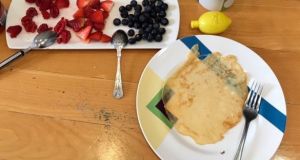 Pity poor Leo Varadkar. Late last night on Twitter our Taoiseach posted what he described as his “last treat” before Lent and - by almost every single measure we can think of - it reeked of sadness.

The state of the pancake for a start. It was just crêpe - horrendously uneven and thinner and yellower than the skin on Monty Burns’s withered face. It was virtually translucent and ridiculously small, barely occupying half of the weird bowl/plate hybrid it was served in.

Whoever was responsible for it should really go and have a long hard think about what they inflicted on our dear leader on his final night before his - metaphorical - 40 days and nights in the desert. And if he made it himself, then maybe he should really consider his position.

But the pancake was only the start of Leo’s last supper of sadness before “an uber healthy 40 days”.

Added to his self-styled treat meal were a handful of miserable looking berries - with two spoons on the plate, suggesting the Taoiseach was expected to share his “treat” with at least one other person.

There was also a shamefully small jar of chocolate spread and - and one of those little plastic squeezey lemon things. Could he not have got an actual lemon? Seriously? It would been cheaper and more eco-friendly and, let’s face it, would have tasted a whole lot better.

On the fringes of his badly lit pic - one posted without so much as a single Instagram filter enhancement - was a jar of mixed nuts and a plastic bottle containing an unpleasant looking yellow liquid.

We’d also have to question the location he chose for his last treat. He ate it off a visibly distressed looking beech-veneered table that would frankly be more at home in a bedsit over a Cabra chipper. Or on a skip.

But what is most troubling about the post is that it paints a most terrible picture of what Leo believes to be a delightful treat.

Who, but a dangerously unhinged and woefully misguided soul would ever describe a few berries, a terrible crepe and an energy drink as a treat?

Where were the fine wines? The fancy Dan gins? The enormous steak? The chips? The snack box from Supermacs?

Even the terrible food pics Donald Trump has posted on Twitter look more appealing Leo’s trial dressed as a treat. Charlie Haughey would not be impressed. That much is true.

0:41 Holohan does not believe airline travel will return to normal 'in the near term'