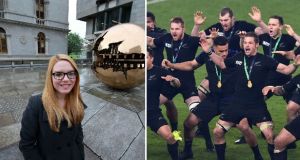 Aoife Finn: “A lot of people think they haven’t heard of te reo. I find that a useful reference point for bringing them up to speed is saying, ‘of course you know Maori – the Haka.’ ” Photographs: Nick Bradshaw/Getty Images

Despite never visiting the country, a woman has become a sensation in New Zealand due to her obsession with the Maori language.

Trinity College Dublin PhD student Aoife Finn from Dundalk admits to spending her spare time reading through transcripts of parliamentary debates from the country in its te reo dialect as part of a dedicated effort to improve her fluency over the past five years.

Citing the cost of travel she says she has never been to the Pacific nation, but that has not stopped her from becoming a hit with its inhabitants due to her love of te reo.

“People always ask me how and why I do it. Initially people think they’re unfamiliar with it but they’re not,” said Finn, who learned the language “in reverse” after studying Maori syntax and sentence structures for her master’s in linguistics.

“When I applied to do my PhD in Trinity I didn’t even consider looking at any other language, it just seemed so natural and Maori is so interesting,” she told The Irish Times.

“A lot of people think they haven’t heard of te reo. I find that a useful reference point for bringing them up to speed is saying, ‘of course you know Maori – the Haka’,”

Finn has been inundated with supportive messages from the southern hemisphere since local media reports about her linguistic endeavours went viral this week, including encouragement from Irish expats.

“I’ve had loads of lovely messages from people on my Twitter and my Facebook and a few of them have been people from Dundalk who live in New Zealand, it’s such a small world.”

Much like the Irish language, te reo is only spoken by a minority of the indigenous people. Just over a fifth of the Maori population are fluent in it, according to New Zealand’s 2013 census, down from a quarter in 2001.

“You could say that I’ve really done things in reverse. I’ve spent the last five years looking at the syntax of te reo but my exposure to it has been very book-based and pure syntax . . . Now I’m trying to get my conversational skills up to speed and learn about the culture,” she said.

“There are a lot of Maori resources online like Maori TV, and there are also historical archives of parliamentary proceedings.”

She still has no immediate plans to go to New Zealand, but hopes to make the journey after she completes her PhD so she can put her studies to practical use for the first time.

“I think it’s really good fun. I’ve never met a language I don’t like learning, but in particular I love Maori,” she said.