Gardaí challenge the PSNI to a ‘dance-off’

Video: Officers in Templemore show the world their dancing skills

Garda recruits at the Garda College Templemore dance to '90s hip-hop song 'My Boo' by Ghost Town DJs as part of the 'Running Man Challenge'. The craze is being called this year’s Ice Bucket Challenge. Video: An Garda Síochána 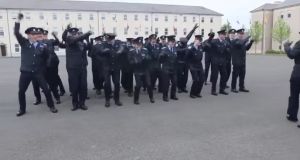 Gardaí showing off their dancing moves in the ‘Running Man Challenge’. Photograph: An Garda Síochana screenshot

The gardaí have dared the Police Service of Northern Ireland (PSNI) to “show us your moves” in a “running-man” dance-off.

The video posted on You Tube and tweeted by the Garda press office shows officers at the Garda College in Templemore in Co Tipperary doing their version of “Running Man Challenge”.

There are shots of gardaí around different parts of the college dancing to the 1996 song My Boo by Ghost Town .

Assistant Chief Constable Stephen Martin responded on Twitter that while he had “two left feet” he was sure someone in the PSNI would take up the challenge.

Police officers around the world have taken on the challenge as the viral craze continues to gain popularity.

It was started in the US by two teenagers from New Jersey, Kevin Vincent and Jeremiah Hall.

In an appearance on The Ellen Show, the two said they came up with the dance when they were bored in finance class on day.

“I woke up and these guys - the Maryland basketball players - they did it,” Mr Vincent said.