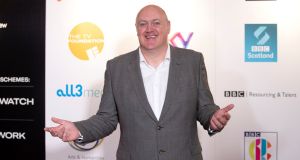 Irish comedian Dara Ó Briain has helped to raise more than £26,000 (about €28,700) for a UK cancer charity after appealing for assistance in locating his three-year-old’s lost toy.

On August 6th, the comedian tweeted that his three-year-old’s “precious” scruffy toy monkey had been lost at some point while in Terminal Five in Heathrow Airport in London. He posted an image of the monkey and asked that whoever finds it gets in touch with him or gives it to the lost and found.

One Twitter user, Ian Wilson, responded by saying he could send Ó Briain a replacement toy monkey, which belongs to his own three-year-old son, Jamie.

In exchange, Wilson asked the comedian to share a fundraising page he had set up to raise money for Bowel Cancer UK, saying his wife Morag had recently died from the disease. On the page, Wilson said he was planning to run a 10km race in York to raise funds for the charity.

Ó Briain said this was fair, and retweeted Wilson’s post to his 2.5 million followers.

Meanwhile, on Friday Ó Briain reported that his three-year-old’s monkey had been located, tweeting a picture of the toy outside a lost and found in Heathrow and thanking everyone who had followed the story and donated to the fundraising page.