Áras an uachtar reoite: Did the President buy everyone a 99 today?

Answer: No, he didn’t. Not even one. But that doesn’t mean it’s not all over Twitter. 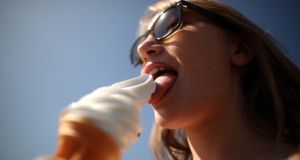 No trip to Dún Laoghaire is complete without a visit to Teddy’s ice cream store. File photograph: Peter Macdiarmid/Getty Images

No trip to Dún Laoghaire is complete without a visit to Teddy’s ice cream store where queues have been known to stretch as far as Howth. Almost.

And it seems even our President isn’t immune to the charms of a 99 on a sunny day.

Earlier on Wednesday, a photo appeared on Twitter claiming Michael D Higgins had bought everyone a 99 in Teddy’s.

Michael D Higgins just bought everyone in Dun Laoghaire a 99 in Teddy's pic.twitter.com/4nuScD8w3y

He was in the area to open the 200th anniversary of Dún Laoghaire harbour celebrations but despite the tweet going viral, the story was too good to be true.

A spokesman for the President said an offer was made by Donal Marren, MC of the event, on behalf of the Dún Laoghaire Harbour Company after the President made a speech.

“No, the President did not buy ice creams for everyone but I’m sure his speech may have inspired the general feeling of goodwill that gave rise to the offer,” the spokesman said.

No 99s were delivered to The Irish Times.