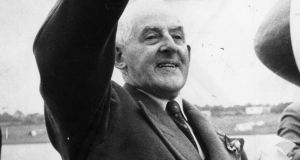 Frank Duff, founder of the Legion of Mary, at Dublin Airport in 1965. Photograph: Jimmy McCormack

The unusual sympathy of Legion of Mary founder Frank Duff for the plight of unmarried mothers in the context of his times was recalled by economist Dr Finola Kennedy on Thursday night.

“The official approach to unmarried mothers and their children did not appeal to Frank Duff,” she said.

Dr Kennedy, author of the 2011 biography Frank Duff: A Life Story, was giving a talk hosted by the Iona Institute in Dublin.

She spoke of how in 1930 Frank Duff opened the Regina Coeli hostel for homeless women in Dublin’s North Brunswick Street.

“Soon after opening, a pregnant woman sought admission. Her entry to the hostel, remaining there subsequently, and keeping her child, led to the inauguration of the Mater Dei aspect of the hostel, a type of hostel within a hostel, specifically organised on the basis of units for mothers and children,” she said.

Later, the Legion of Mary acquired houses in North Great Georges Street “which were divided into flats and could be used by the women and their children as step-down facilities before moving on to independent living”.

The object, Duff said, was “to create “a home-life feeling about the place”. Duff stressed that the surroundings should be as beautiful as possible as “the silent influence of beautiful and artistic surroundings is incalculable”, Dr Kennedy recalled.

“He said that the ‘conduct of the women will in great measure be governed by their surroundings’. The women should be encouraged to take an interest in their appearance and one legionary suggested the introduction of several panel mirrors.”

Duff attributed difficulties encountered by children when they left industrial schools to “the absence of the children’s mothers during a period of life when such is necessary to the children. The consequence is that a peculiar and unnatural life is lived by those children.”

Forty years after the hostel opened, Duff reflected how “the success of the method has been positively incredible. About 3,500 children have been dealt with in the intervening time. All but the handful at present resident in the hostel have gone out into the world and have been living the ordinary life of the community.”