Veil of secrecy lifted on confidential Government documents from 1989

State papers: Only a fraction of documents released this year due to staff shortages and lack of storage space 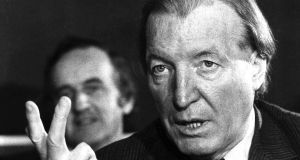 Charles Haughey: The public will be able to read for the first time about what was actually said at private meetings between the then taoiseach and British prime minister Margaret Thatcher in 1989

At the beginning of January each year, the National Archives lifts the veil of secrecy on thousands of boxes of documents from Government departments dating from 30 years beforehand.

The 30-year rule allows the public – and scholars – to view confidential documents generated at Government level for the first time, albeit three decades after the event.

So, for example, this year the public will be able to read for the first time about what was actually said at private meetings between taoiseach Charlie Haughey and British prime minister Margaret Thatcher in 1989, how the Irish government reacted to the murder of Belfast solicitor Patrick Finucane, and how it responded to the high-profile miscarriage of justice cases of the Guildford Four and the Birmingham Six.

Documents should in right be released from all Government departments and agencies. However, because of a lack of storage spaces and staff shortages, the National Archive was in a position to release only a fraction of the papers this winter.

Documents are available for only four of the 61 agencies and departments covered by the Act and the remainder will not be available until the difficulties are resolved.

Moreover, the Government has been trying to reduce the time span of confidentiality from 30 years to 20 years.

The National Archive Act was amended in 2018 to reflect changes in Britain, where a new 20-year rule is already being phased in. That has resulted in state papers on Anglo-Irish relations from the North and London being made available years in advance of Ireland. In the new year, British papers from 1995 and 1996 will be released. By next year, Ireland will be lagging behind Britain by nine years, with no guarantee the phasing-in of the 20-year old rule will begin.

Family of Irishman who fell to death in Australia call for candles to be lit in tribute 09:27
Motorcyclist killed in collision with tractor in Co Mayo 09:23
Coronavirus: Ictu warns against sudden withdrawal of pandemic supports 08:20
Coronavirus: Face masks should be ‘obligatory’, says Government adviser 07:35
Coronavirus: Ministers to question Holohan over two metre rule 07:00