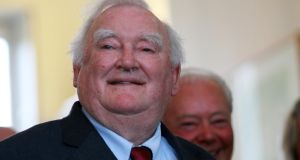 Tim Pat Coogan: my father abandoned thoughts of practising law and at 24 became the first deputy commissioner of An Garda. Photograph: Nick Bradshaw

In considering the purge of senior Garda officers revealed in the newly released State Papers, the historical background against which the crackdown took place should be understood.

From the time of the formation of Fianna Fáil in the 1920s, Éamon de Valera was dragging an IRA tail to an extent that the historian David Thornley described “Fianna Fáil cumainn by day becoming IRA flying columns by night”.

The IRA’s principal enemies were An Garda Síochána, which in turn was thought of by senior figures in the Garda such as commissioner Eoin O’Duffy as being the main bulwark and support of the Cumann na nGaedhael government.

Acts of extreme brutality and lasting hatred on both sides were an inevitable outcome. On attaining power, de Valera did not unleash the outright public onslaught on the Garda that extremists sought. But he did choose the more Machiavellian path of individual sackings coupled with a de facto if not de jure policy of blocking the promotion of members of the force associated with the previous regime.

The war of attrition against the Garda continued. For example, there was the dismissal or demotion of the more prominent Garda officers, including O’Duffy and the head of the CID David Nelligan, and the demotion and eventual resignation of my father, Éamon Ó Cuagáin, who had been deputy comissioner.

My father had not intended joining the Garda, which at its inception had suffered a mutiny and had to be reorganised. But one day the president of the executive council WT Cosgrave sent for him to tell him, with commendable honesty, that they were setting up a new force and had to place Eoin O’Duffy in charge because he was “a wild man” and they didn’t want him as chief of staff of the army. (O’Duffy had been the principal instrument of Michael Collins’s clandestine policy of kidnapping Orangemen and generally attempting to destabilise the new six-county government by fair means and foul.)

Ironically, in view of my own journalistic career, the Irish Press played a key role in my father’s downfall. He was sacked as deputy garda commissioner in 1936 following an altercation in the Gresham Hotel in Dublin with John Joseph Harrington, the general manager of the Irish Press.

Harrington had been sent over by the Irish-Americans in the fairly naive hope of his keeping an eye on their investment in Irish Press shares. The row was a godsend for de Valera’s policy towards the Garda and a publicity disaster for my father because of the coverage given to an inquiry that he demanded into the incident. He left the force in 1941 and completed his legal studies.

Once more, WT Cosgrave entered his life and he was persuaded to stand for Cosgrave’s old seat in Kilkenny, becoming a TD for the county and later the amalgamated constituency of Carlow- Kilkenny and, along the way, the general secretary of Fine Gael.

During his time at the bar, he formed part of an unusual group of friends, including the former chief of staff of the IRA and later Nobel Peace Prize winner Seán MacBride; Vincent Grogan, the chief knight of the Knights of Columbanus; and Éamon de Valera’s eldest son, Vivion.

Vivion, who had heard me speak at a debate at Blackrock College, gave me a job at the suggestion of my history teacher, Fr Michael O’Carroll. I began as a copy boy in the Evening Press, which was founded in 1954. Later in 1968, when he appointed me editor of the Irish Press, Vivion told me that his father had never wanted the newspaper to cover my father’s case as it did, blaming editorial decisions of the period.

My late brother Brian made it something of a lifetime task to discover the truth behind my father’s leaving the Garda, and his research showed that Éamon de Valera had intervened more than once against my father.

Firstly, as the editor-in-chief, he interested himself in the Gresham episode from day one and found no fault with the extensive coverage given by the Irish Press to the subsequent official inquiry into the incident. Secondly, my brother also obtained from the Department of Finance correspondence between the secretary of the department of the time, JJ McElligott, and Garda commissioner Eamon Broy. McElligott wrote repeatedly on behalf of de Valera stating that the taoiseach wanted my father dismissed.

Broy, who along with Nelligan had been Collins’s main source of intelligence from within Dublin Castle during the War of Independence, staunchly defended my father and extolled his abilities, but to no avail. The undeclared policy of constructive dismissal, referred to by my father in the recently released State Papers as the “merciless stoning of myself and others”, triumphed. My father resigned after many vexatious transfers and petty harassments.

He died in January 1948, while being spoken of as being likely to become the minister for justice in the interparty government that put de Valera out of office that month after 16 years in office. His premature passing meant he left a widow with three young children and no Garda pension.

The setting up of an unarmed police force in the midst of a Civil War was one of the Free State’s most significant achievements, but Civil War memories have helped to interact with many other factors to produce the lamentable state of affairs that now prevails in the policing of the Republic. One of the top priorities of our present Government should be the restoration of the morale, standards and efficiencies of the early force in today’s circumstances.

Tim Pat Coogan is a writer and historian. He is a former editor of the Irish Press.