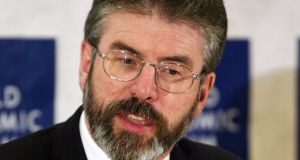 In May 1996 Sinn Féin leader Gerry Adams said the party would sign up to the Mitchell Principles on non-violence. Photograph: Reuters/Marcel Bieri/Swiss-Images

The IRA ceasefire broke down in 1996, plunging the peace process into turmoil.

The year opened with the RUC chief constable, Sir Hugh Annesley, saying the IRA, which was nominally still on ceasefire, had been responsible for six recent murders using the cover name of Direct Action Against Drugs.

In January, Sinn Féin said the IRA might agree to verifiable decommissioning once a political settlement had been agreed. In response, British prime minister John Major announced his decision to hold elections to a new forum, which would lead to all-party talks.

On January 30th, the INLA leader Gino Gallagher was shot dead in Belfast, sparking an internal feud in the organisation. In a visit to the US, Adams met President Bill Clinton who called for “rapid progress to all-party talks”.

On February 9th, a Provisional IRA bomb exploded at Canary Wharf in London, killing two people and marking the breakdown of the 18- month IRA ceasefire. The organisation accused the British government of bad faith. Taoiseach John Bruton said the IRA must resume its ceasefire or Sinn Féin would be isolated. The crisis led to renewed talks between Hume and Adams.

However, IRA violence continued in Britain, with an IRA member dying when his bomb exploded prematurely on a London bus on February 18th. Meanwhile, loyalist paramilitaries said they would maintain their ceasefire for the time being.

On March 15th, a nine-year-old girl was killed when INLA gunmen fired into her family home in Belfast.

On May 20th, Adams said Sinn Féin would sign up to the Mitchell Principles on non-violence but there was no sign of a renewed IRA ceasefire. May saw elections for the Northern Ireland Forum, with increased votes for the DUP and Sinn Féin. The UUP and SDLP remained the largest parties.

On June 4th, President Mary Robinson began an historic four-day visit to Britain – the first by an Irish head of state.

In July, a confrontation between the RUC and Orangemen at Drumcree and a police decision to allow the annual march to proceed triggered widespread violence across the North.

A Catholic taxi driver was shot dead by the UVF near Lurgan, Co Armagh. As marching disputes erupted in Belfast, Bellaghy and Dunloy, the British government announced a review of the handling of parades.

On December 20th, an RUC man guarding Nigel Dodds of the DUP was wounded by the IRA inside a Belfast hospital. The attack occurred while the politician was visiting his seriously ill son.

The death toll from the Troubles for the year was 15.