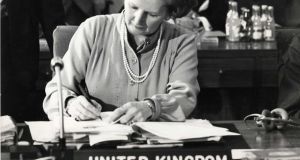 The roots of British scepticism towards the European Union which eventually led to Brexit were disclosed by prime minister Margaret Thatcher at private meetings with taoiseach Charlie Haughey 30 years ago.

At a meeting at the margin of a European Council summit in Madrid in June 1989, Thatcher described European Monetary Union as “airy fairy” and the proposed Social Charter as “a charter for unemployment” that would result in the “destruction of jobs”.

She also said she opposed the concept of a European environment protection agency and any further integration of the community.

Her scathing criticisms of the direction of the community in 1989 were remarkably close to those used by Leave campaigners during the Brexit debate (with the exception of immigration, which was not an issue then). The only policy which she gave full approval to was the drive for a single market, which echoes the political thinking of the current Tory government led by Boris Johnson.

She singled out German chancellor Helmut Kohl for particular criticism at the Strasbourg meeting over the Social Charter.

“He wants to inflict high German social and other costs on other countries in the community so that German industry can continue its expansion.”

Saying other countries should “slow work” on the charter, she said: “We can’t have more regulations on part-time work or nighttime work.”

Haughey agreed that part-time work was essential for many weaker economies.

Thatcher also told the taoiseach that European Commission president Jacques Delors need to be watched “like a hawk” over another idea she opposed, namely a new Europe-wide bank.

“We want a single market,” she said, “but Germany resists. Kohl resists movement on insurance and financial services. These are among the touchstones of progress.”

In further dismissive remarks on the “wretched EMU idea”, she said if it happened, then Kohl would pitch for control by the Bundesbank.

Outlining her opposition to the environmental protection agency at the meeting in June 1989, Thatcher said there were plenty of organisations in existence which could do that job. She mentioned the Institute of Climatology and the United Nations Environmental Protection Agency.

In advance of the meeting, the British ambassador to Ireland Nicholas Fenn had briefed Irish officials that Thatcher regarded the Social Charter as a “lot of codswallop which, if implemented, could price Europe out of world markets and damage employment”.

Fenn said Thatcher felt a “mite lonesome” in making those points. It implied she wanted Ireland to be more supportive of her stance on the Social Charter at the summit of EU leaders.