Despite public histrionic denouncements, North’s first minister advocated getting ‘as much as possible out of the cow’ 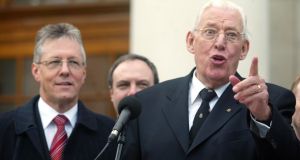 Former Northern Ireland first minister Ian Paisley “vigorously” backed the benefits of membership of the then European Economic Community and advocated getting “as much as possible out of the cow”, newly declassified papers show.

Far from his publicly histrionic denouncements of the EEC – including infamously describing it as “a beast ridden by the harlot Catholic Church” – the former DUP leader privately extolled its virtues, files released under the 30-year rule reveal.

And on its potential for forging closer cross-border relations in Ireland, Paisley referred to the fall of the Berlin Wall and remarked that it would be difficult to predict the impact of the EEC – now the European Union – on the island.

In the files, marked confidential and “Seen by the Taoiseach”, David Donoghue, a diplomat based at the Irish Embassy in London, reports back to Dublin about a attending a lunch on December 6th, 1989, where Paisley was the guest speaker.

It was an “informal, off the record occasion” organised by the Consular Corps of London, a representative body for diplomats based in the UK. “The DUP leader was in high good humour throughout, partly a consequence of the Christmas merriment which characterised the lunch,” wrote Donoghue.

During an “unexceptional” formal address, which “in deference to the Christmas cheer” was delivered with “less bombast than usual”, Paisley began by asserting his pride in his Ulster loyalist identity. “The Ulster loyalist, he said, is a Protestant, a patriot, hard-working and plain spoken.”

Donoghue said he later asked Paisley “what scope he saw for improved relations between North and South in the context of our joint (European) Community membership and, more specifically, of Ireland’s approaching EC presidency.”

“On the broader issue of the implications which 1992 might have for improved relations between North and South, Paisley said that it was difficult to predict what might happen in that context,” Donoghue reported.

The year 1992 referred to the planned ratification of the Maastricht Treaty three years later, which subsumed the EEC into the newly created EU.

“After all, who could have predicted that the Berlin Wall would start to come down this year?” Paisley asked. “However, if the Taoiseach were to remove the claim under Articles Two and Three of the Irish Constitution, [PAISLEY]would look forward to a day when there could be ‘a meeting of equals and – who knows – even a meeting of minds’.”

Donoghue said Paisley’s “own philosophy towards Europe, he had earlier indicated in private conversation, was to ‘get as much as possible out of the cow’; he agreed vigorously when a guest remarked on the benefits which EC membership had brought to Irish farmers.”

At the time, taoiseach Charlie Haughey was trying to get the North’s three MEPs around a table in an attempt to win more European funding for the region.

Paisley expressed scepticism that this could be done under EC rules, and “reverting to a more characteristic mode, Paisley contended that in any event the Northern Ireland people would not ‘sacrifice principles for money’”.

Then SDLP leader and MEP John Hume said Paisley told him “that there were no circumstances in which he was going to find himself talking to the Taoiseach”.

Hume told Donoghue he “planned to work further on Paisley in this respect”.

Paisley went on to defend his record as an MEP during the lunch, “claiming that he had always voted for things which would be of benefit to the Republic, provided, of course, that these did not adversely affect Northern Ireland’s interests”.

“He complained that Irish MEPs had not always reciprocated.”

Covid-19: Two-week quarantine period for arrivals into State could be lifted for some 01:07
Coronavirus: HSA says 800 workplace inspections carried out since May 18th 01:00
No temporary increase in weekly asylum payment during pandemic 01:00
Rural Ireland ‘has nothing to fear’ from the Greens, FG councillors are told 01:00
Women’s Aid helpline sees calls increase almost 40% during lockdown 00:05

1 All students will not return to school even if social distancing rules are relaxed – McHugh
2 Trump announces clampdown on social media companies
3 What exactly will happen in phase two of easing restrictions?
4 Emily Maitlis thanks BBC viewers for support after Cummings row
5 Miriam Lord: Taoiseach is trapped in a Zoom session from hell
Real news has value SUBSCRIBE