State papers: ‘I cried with joy' when Haughey re-elected 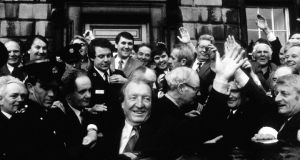 Fianna Fáil leader Charles Haughey waves to supporters outside Leinster House after his election as taoiseach in 1987. Photograph: Eamonn Farrell/RollingNews.ie

Files from the Department of the Taoiseach show there was unconfined joy among some of Charlie Haughey’s most fervent supporters when he returned as taoiseach in 1987.

One woman wrote from Spain, sending him a handmade card depicting a bunch of flowers and told him he was “terrific”.

She wished him God’s blessing on the difficult task of running the country but said if anyone could do it, he could. “I prayed and hoped for you and indeed cried with joy when you were elected,” she said.

A woman from Monaghan sent him a Mass bouquet card but she wasn’t offering prayers for people who did not support the Fianna Fáil party. “I do not think the Irish Press is our paper any longer and RTÉ is not much help either to our party,” she wrote. “I would like to see Ted Nealon’s head on a plate, thank you.”

Nealon, a former journalist, was a Fine Gael TD at that time and had served as minister of state for arts and culture before the 1987 election. He was also the author of Nealon’s Guide to the Dáil and Seanad, which was published after every general election. The letter-writer did not outline what Nealon had done to draw her ire.

She also urged Mr Haughey to “please go on TV as often as you can”, and said she enjoyed his performance on the Late Late Show. “How dare RTÉ show such little regard for Fianna Fáil and all of us supporters?” she asked. “How DARE they? [her capital letters] It’s an insult. I hate them now.”

‘Get rid of the dead wood’

Writing from Dún Laoghaire, a doctor praised Haughey for curtailing increases on “already scandalously high salaries of the least in need. I hope you will also get rid of the dead wood – Senate, president, etc,” he wrote. “Pensions after four years is an intolerable insult to us who get no pensions after a lifetime of toil and service.”

The doctor said the money saved should be given to homeless waifs and strays. “Make a school for itinerants in Áras an Uachtaráin,” he wrote. “He [president Patrick Hillery] has two other homes and is now a very wealthy man.”

This has echoes of businessman Peter Casey’s comments when he ran for the presidency in 2018. He suggested moving Travellers into Phoenix Park where they would attend school. Traveller and actor John Connors said Casey was proposing a concentration camp scenario.