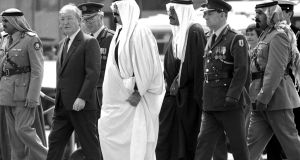 It is considered “highly improper” to ask a Saudi Arabian about his wives or any female members of his family, Government officials were warned as they prepared for a state visit of Crown Prince Abdullah in June 1988.

They were also advised to cover wine bottles with a “veil” because it was deemed less offensive than a bare wine bottle.

The visit involved a massive entourage, with one memo referring to the booking of 100 hotel rooms.

Some 24 military and security officers were listed to travel, and permission was sought for two ‘38 Special’ guns to be carried into the country.

One Department of Foreign Affairs background briefing explained that the Crown Prince had a number of wives and many children. “NB, it is considered highly improper to enquire of a Saudi about his wife or wives or about any of the female members of his family. Neither is it permissible for a woman to make such an enquiry. It is in order, however, to enquire generally about a Saudi’s ‘family’ and particularly about his sons.”

The officials were particularly anxious to not cause offence when it came to serving drinks because of the Saudi ban on alcohol. “Soft drinks should always be at the front of the waiter’s tray when he is approaching a Saudi . . . His Royal Highness has a known preference for carrot juice and this should always be available,” one memo noted.

“Ideally, the wine should also be decanted – for some odd reason the sight of the noble beverage in decanters or jugs is deemed to be less offensive than in the bottle,” another memo, marked confidential, read.

“If we cannot manage that, the bottle should be suitably (dare I say it) “veiled”, ie, wrapped in a serviette. Bearing the forbidden potion, the waiter then proceeds to enquire, sotto voce, of each guest (Irish as well as Saudi) whether he or she would prefer wine or juice.”

Liqueurs must not be served.

After the visit, it emerged that the crown prince had brought gifts, including a gold jewelled dagger for taoiseach Charlie Haughey. Haughey’s wife Maureen was given a diamond necklace reportedly worth £250,000, although Haughey told a Dáil debate the value of the necklace had been exaggerated.

The media controversy over the gifts reached the ears of senior Saudi Arabian officials, according to the newly released State papers. They contain a letter from an Irish diplomat in Riyadh to the Department of Foreign Affairs in December, 1988. He had been taken aside by a Saudi foreign ministry official and asked to explain how the gifts had become an issue in the press. “Madani said they had received reports from the ambassador in London on the matter and in a tone of rebuke added that they were quite displeased that the gifts should have become an issue of controversy,” he wrote. “He told me lest we were in any doubt, that the gifts were intended to be personal and if it would help to end the controversy we could say that.”

The extravagant Saudi entourage made Charlie Haughey’s trip to Paris the following year look almost modest. Among other engagements, the taoiseach was viewing the restoration of the Irish College, timed to mark the bicentenary of the French revolution. His entourage of 13 included his wife Maureen, their daughter and son-in-law, businessman Dermot Desmond and his wife, minister of state Máire Geoghegan-Quinn and her husband, and officials. A briefing note pointed out that Desmond and his wife would travel to and from Paris independently.

The Haugheys’ weekend stay in the exclusive Hotel Meurice on Rue de Rivoli ran up a bill of almost 12,500 FF (€1,900), receipts show. The historic hotel was favoured by royalty and famous faces such as Salvador Dalí and Elizabeth Taylor.

Two weeks later, French president François Mitterrand met the taoiseach in Dublin. A Government file contains menu choices for a lunch event and while options such as foie gras-filled eclairs and venison medallions were approved, the suggestion of turnip and bacon soup did not appeal to one official, who scrawled a big ‘No’ beside it.

A £20 wine from Château Langoa Barton was suggested for the cheese course because of the Barton vineyard’s link with Ireland, while a £13 wine from the Schlumberger vineyard was suggested because of its connection with the new French owners of Luttrellstown Castle. Heidsieck Monopole champagne was offered to accompany dessert.